Staff member
(Article by JohnThomas Didymus at The Inquisitr News) 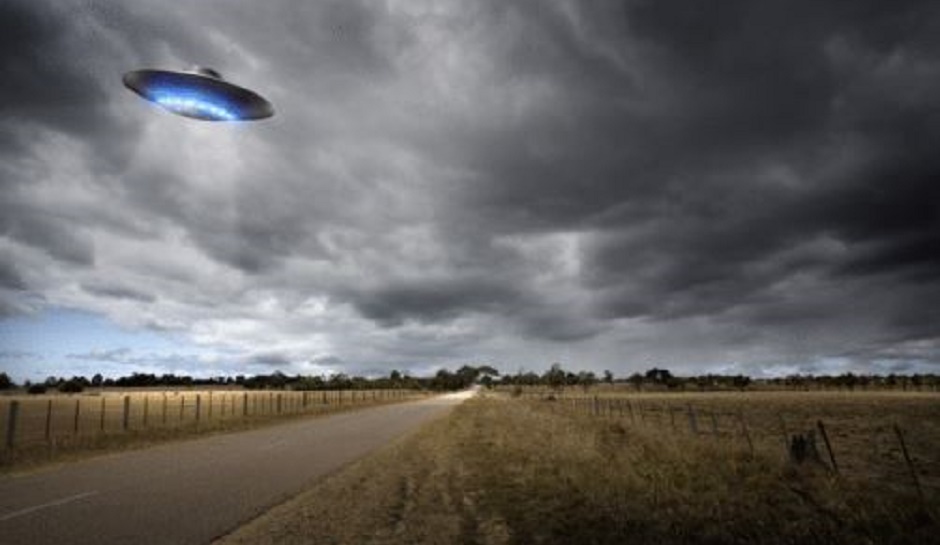 A witness at Ocala in northern Florida has captured amazing footage apparently showing a bright orb UFO that decelerated instantaneously and hovered in the air for several minutes before descending to ground level amid a lightning storm.

According to the report submitted to the Mutual UFO Network (MUFON) and filed as Case 78114, the witness was standing with a female friend in the porch of his home watching thunderstorm clouds approaching at about 8:30 p.m., on July 31, 2016, when he noticed a shocked look on his friend’s face.

He looked in the direction of her stare and noticed a brilliantly glowing orb UFO in the distance. The orb moved at tremendous speed toward them, Open Minds TV reports.


“I noticed a very brightly lit ‘sphere’ moving towards us rather quickly from the distant sky to the south.”
​
He could see the UFO clearly because it stood out prominently against the backdrop of dark clouds and lightning flashes due to an intense glow that had a bluish tinge.

“It was so bright and moving so quickly that it gave the appearance of being close,” he said. “The color was a bluish tint but did not appear to be casting light in any direction.”

He expressed amazement at the speed of the UFO and its ability to decelerate to a halt in an instant. The witness said the UFO “stopped on the dime” and hovered, perfectly motionless in the air, for several seconds before it began moving again.

He managed to regain composure after the initial shock and as the UFO hovered motionless in the air he began filming it with his cell phone camera. And fortunately, he was able to capture several seconds of amazing footage showing the object with a bluish glow hovering motionless in the air.

“At this point I began recording with my cell phone,” he told MUFON. “After about 90 seconds, the sphere flashed off and left just a blinking, or pulsating red light.”

The UFO was not visible in the video after the blue glow changed to a flashing red light (see video above). According to the witness, the flashing red light appeared dim and distant compared with the bluish glow and thus the cell phone camera was unable to capture it.


“As the object got closer it abruptly stopped and hovered perfectly still for multiple minutes.”
​ 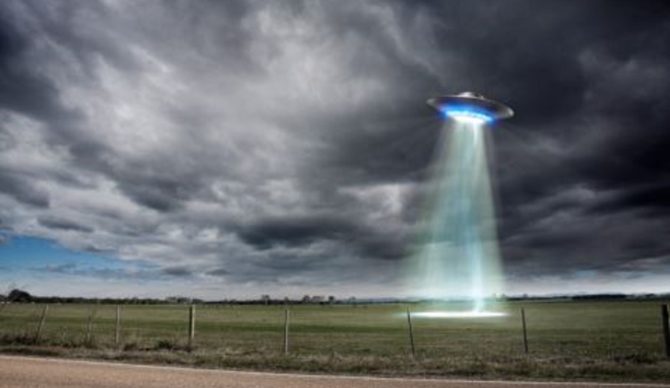 A UFO hovers over a field [Photo By Aaron Foster/Getty]
“I want to mention that the red flashing appeared very distant and dim,” the witness reported, “but the illuminating [blue] glow was shockingly bright making it hard to judge distance.”

While the witness filmed the hovering UFO, his companion left the porch and walked down the road leading to the house for a closer look at a different position. She wanted to get closer to the UFO for a better assessment of its size.

The witness continued filming after his friend left the porch. The UFO had changed from a blue glow to a red flashing light and there appeared to be several similar UFOs with red flashing lights hovering in the air further away.

“When the craft went to a blinking red light I could see several other red lights further away,” he reported.

But he was uncertain whether there were now several crafts or just one.

He continued filming until the flashing red light began moving in circular patterns and finally changed back to the bright blue light.

Then the UFO began descending, slowly, to ground level.

After it had descended below the level of nearby trees it began moving to the left of the witness’ position until it disappeared out of sight behind the trees.

“At this point it descended below the tree level and began moving from right to left,” he said. “I could see it through the trees before it disappeared out of sight.”

When his friend returned, she confirmed his observations from the porch, saying that the UFO changed color from a blue glow to a red flashing light as it hovered. She also reported watching the UFO descending to ground level until it went out of view.

She was certain it was not a helicopter and that it was much bigger than a drone.

The witness was spooked by the experience.


“I had a strange feeling that what we were seeing wasn’t meant to be seen and it even made me feel afraid.”
​ 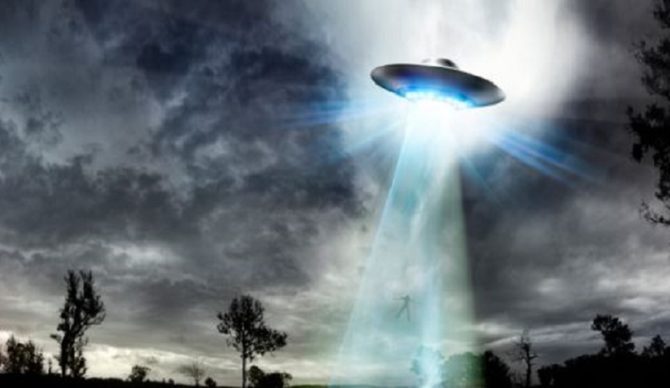 UFO hovers below storm cloud, shines blue light [Photo by Aaron Foster/Getty Images]
“[I breathed heavily]… and [had a] very high heart rate during the 10-minute ordeal,” he said.

A MUFON field representative in Florida investigated the case.

The investigator noted in his report that he considered the possibility the UFO was a Chinese lantern. But the witness’ insistence that the UFO had traveled toward them at a great speed appeared to rule out the possibility.

The witness, who had served with the U.S. Air Force for four years, estimated the speed of the UFO as it approached at about 2,000-2,500 mph.

The witness insisted that his estimate of the speed of the UFO was reasonable, noting that during his USAF service he worked with a variety of aircraft, including fighters and cargo planes, and was familiar with their flight characteristics.

The investigator also considered the possibility that it was a drone with LED lights.

“There are known cases of a person flying a small drone during a thunderstorm to try to get great video shots,” the MUFON investigator wrote in his report.

The investigator suggested that the witness may have overestimated the speed of a drone as it approached.

“At night, without a frame of reference, an object might appear to be moving much faster than it is,” the investigator’s report said.

The MUFON investigator was unable to identify the object but suggested it may have been an unmanned aerial vehicle (UAV) or drone.

UFO Lands In Florida: Amazing Footage Shows Glowing Orb Descending To Ground Level Amid Lightning Storm At Ocala [Video] is an article from: The Inquisitr News

Xiggy said:
“Drones can be dressed up with LED light kits."
Click to expand...

That right there is the only reason why I've been wanting to buy a drone!

The only thing stopping me from dropping money on one of the big drones that have LED kits available for them is that my experience with a mini-drone didn't go too well. The smaller & cheaper drones usually don't have stuff like the auto-stabilizing features which means you need to learn to control & fly them using skill alone. To date I have not mastered that skill so that tells me that putting the money into an expense unit wouldn't make much sense.

G
The Greys that Glow by FXsculpture

In Search of UFOs