A "discoid shape" is circled in a picture taken at Stonehenge and submitted to the British Ministry of Defense in 2009. The ministry said trying to identify the speck would be an "inappropriate use of defence resources."

Britain's Ministry of Defense finished up its release of almost 60 years' worth of UFO sighting reports on Friday with a bang: a 4,300-page cache of documents that describe strange sights over Stonehenge and Parliament, and lay out the reason why the ministry shut down its UFO desk three and a half years ago.

Thanks in part to the proliferation of camera phones, the number of UFO reports in the U.K. doubled in 2008, to 208 reports for the year, said David Clarke, a UFO historian who reviewed the latest files in a YouTube video. Then, in 2009, the pace of sightings tripled, to a running total of 643 reports by November of that year.

"That really did put a strain on the resources that the MoD had committed to this subject, and really led up to their decision to finally pull the plug on Britain's X-Files, simply because they just didn't have the resources to investigate these sightings, or to look at them in any detail," Clarke said. "So they just tended to be filed away."

That was basically what happened to the Stonehenge sighting: In January 2009, the ministry received several photographs that showed a speck in the sky over the millennia-old monument in Wiltshire. "I didn't see anything in the sky at the time, because I was focusing upon the stones," the witness wrote in an archived email. "Upon uploading them to my computer, though, I spotted the discoid shapes in the background. ... I'm sure you get this kind of thing every day! However, I'm very fond of my UFOs so needed to share them!"

The ministry wrote back, saying that it doesn't try to identify the source of UFO sightings "unless there is evidence of a potential threat to the United Kingdom." Trying to explain every sighting would be an "inappropriate" use of defense resources, the ministry said. A similar reply was sent to a witness who reported seeing "a craft that had green, red and white lights" hovering over the Houses of Parliament in February 2008.

Clarke said many of the mobile-phone snapshots sent in between late 2007 and late 2009, the period covered by Friday's document release, were of such poor quality that it was hard to tell what was going on. The "vast majority" of cases turned out to have down-to-earth explanations, he said. Here's a sampling of the highlights: 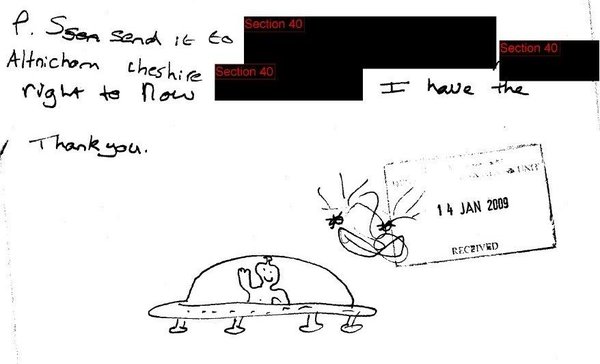 A schoolgirl's letter includes a drawing of an alien in a flying saucer.

"We have now come to the end of this program of release for the UFO files, and it is often said about UFOs that 'the truth is out there,'" Clarke said in the video, which was recorded amid the ministry's filing cabinets. "In my opinion, the truth is actually in here, in these files."

The latest batch of files, as well as previously released X-Files, can be downloaded via the British National Archives website.

How about asking the taxpayers whether they want to continue the program? I bet some of them would agree.