I turned on BBC iplayer tonight to find something to fill some time and Day of the Triffids just appeared on it:

A quick google and there is some press release on it. The cast lineup sounds a bit more expensive than usual for something like this:

Google live is showing a bit of twittering on it already.

More info at the BBC: 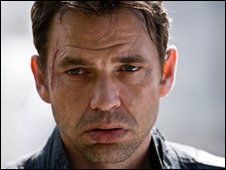 Dougray Scott has appeared in movies such as Enigma and Mission: Impossible II

The flesh-eating plants of John Wyndham's sci-fi classic The Day of the Triffids return this week in their first television outing for almost three decades.
"Imagine being blinded, and I'm going to throw you into a lake and in that lake are 50 crocodiles... and you've got to get to the other side."
That's how actor Dougray Scott describes what it's like for the human race in this new two-part production that co-stars Joely Richardson, Brian Cox, Vanessa Redgrave, Eddie Izzard and Jason Priestley.
The story is based on Wyndham's post-apocalyptic novel, published in 1951, but is set against the background of a global energy crisis.
In this version by Patrick Harbinson, the Triffids are cultivated as a source of alternative fuel called Triffoil. When a solar storm leaves most of the world's population blinded, millions of the man-eating plants begin to roam Britain. 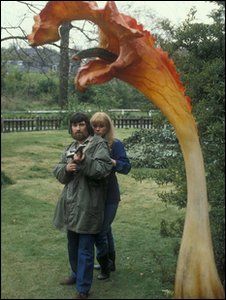 The last time TV tackled the Triffids was in a 1981 BBC production starring John Duttine as the hero Bill Masen.
Scott, who plays Dr Bill Masen in the new version, says the Triffids terrified him as a child.
"I do have a memory of the TV series - there was a lighthouse at the end and they killed them by pouring salt water over them."
He adds quickly: "It's not how we kill them!"
Tragic event
"I remember the novel more than anything," says Scott.
"It's a wonderful post-apocalyptic tale - an examination of how differently people deal with a tragic event, how some attempt very fascistic methods to rebuild society and some people have a more humane approach to it.
"The Triffids are secondary in some respects. To me it's a tale of two ordinary people coming together in extraordinary circumstances."
He is referring to the character of Jo (Joely Richardson), a woman who joins Masen in the fight against the Triffids. 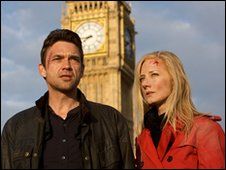 Scott says his scientist character is driven by a need to understand what makes Triffids different from other plants.
"Do they have brains? How do they communicate? When they do attack why do they go for the eyes?" he says.
The shoot lasted nearly 10 weeks and locations included the abbey of St Cross in Winchester and around the Cabinet War Rooms in London.
"There was a beautiful sequence on a deserted Westminster Bridge at 6.30 in the morning with police holding back the traffic. That was kind of surreal," recalls Scott.
The look of the Triffids is being kept secret - though we do know they are computer-generated, unlike their more rubbery cousins from 1981.
"I've done CGI and green screen before, but this was the most intense experience in that respect, having to imagine things there you've only seen pictures of. It's pretty exhausting to act to nothing," says Scott.
He adds: "It's geared towards the whole family, but it's hopefully going to be scary."
The Day of the Triffids begins on BBC One on 28 December at 2100 GMT
Click to expand...

It will be interesting to see how close this mini series is to the book. It was a quite geared up towards the survivalist in many ways. Also I wonder how many people will be watching this without having ever watched the previous incarnations or read the novel and yet will have watched 28 Days Later and will be sat there noticing particular elements that appear the same. (My first watching of 28 Days Later had me in a bit of a rage at certain scenes that appeared to have been copied right out of the novel Day of the Triffids!)