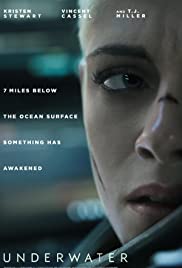 A crew of oceanic researchers working for a deep sea drilling company try to get to safety after a mysterious earthquake devastates their deepwater research and drilling facility located at the bottom of the Mariana Trench.

An unknown, massive earthquake happens in a drilling station in the bottom of the Mariana Trench. A scientific crew find their way into another station under a dark water, a dangerous of humanoid creatures, and a lack of oxygen.

Disclaimer:
I watch a whole lot of movies. I tend to be critical of writers making sense to reality.
Like in Alien Covenant where the crew abandons their mission and puts everyone in danger, it just wouldn't happen.
Well, there's a lot of 'writer mistakes' mistakes in this. Not only in sound situational thinking, in the premise of the location.
Therefore, my review is going to be kinda jaded to making sense both in the story and the actual implied sets/situations.
I will try to use a spoiler tag but be forewarned, I may miss some.

On the surface it looks like a pretty good popcorn flick and if you can suspend all logic, you can have fun watching it. It has all the audience elements.
However, if you have a practical mind that understands physics and situational reasoning (typical for those who follow and enjoy science fiction) the film is full of things which make you want to grab the writers by the neck and squeeze smartly.

So, the film is set in the bottom of the Mariana's Trench. In the opening scenes it specifically indicates the environment of "Immense Pressure of 8 Tons Per Square Inch". Remember that detail.

Granted, the film can't be shot at the Mariana's Trench at 8 tons psi. so some leeway should be granted for the sake of the story. The same leeway needed for Leviathan, Deep Star Six, the Abyss and other deep sea films. However, while Leviathan and Deep Star Six embrace the pressure, The Abyss and Underwater destroy the significance and threat of the pressure.

Levaithan and Deep Star used high pressure suits and habitats you would expect to see in a deep water scenario.
Leviathan 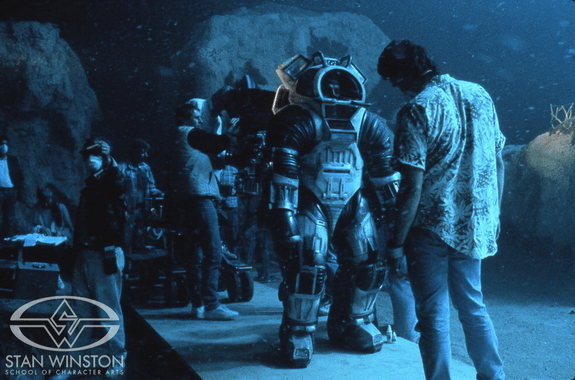 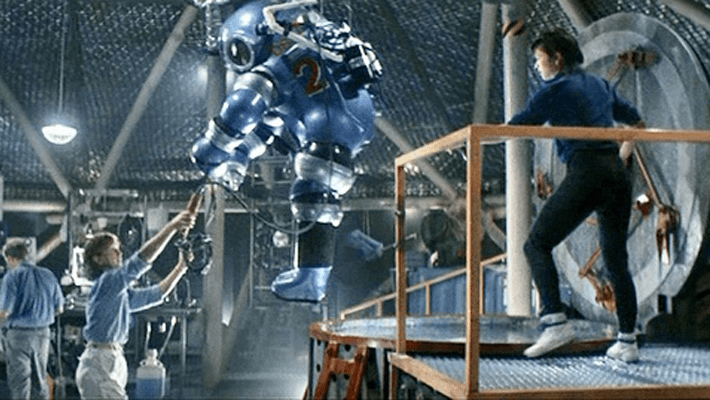 But... Underwater takes place at the bottom of the Mariana's Trench, deeper and more pressure than the location in the other two movies yet they wear a suit they can walk and climb in with relative ease. 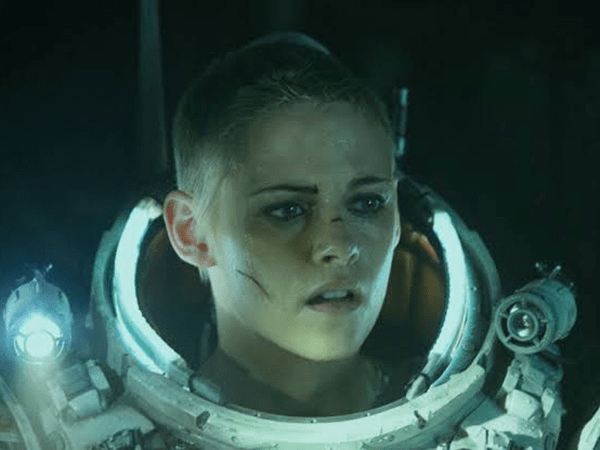 Remember in Leviathan Six-pack said "One little hole in the toe of his suit crammed his whole body up into his helmet"?
8 tons psi changes the threat level.
Its reasonable the writer would account for that extreme threat level.
Its reasonable the director would account for that extreme threat level.
You get a hole in your suit or a hole in your habitat you are dead before you know what happened.
Then there is the whole hydraulic physics reality. Simply put, air compresses/liquids do not.

If you are at the deepest part of the ocean with 8 tons psi of water pressing on all surfaces, if you habitat ruptures the water is going to compress the air into a bubble with a pressure of 8 tons psi.
Last I knew, the human body does not support 8 tons psi so water or air at 8 tons psi is going to crush you immediately.
So there wouldn't be air pockets to crawl around in, even if there were, you could never survive them.
So, within the first 10 minutes of the film, I knew the writing and filmaking standards were sub-par. It kinda ruined my expectations for this film and I had problems not focusing on the mistakes.
By my 5th watch (because it has monsters and I really, really like monsters) I was finally able to watch it like the mindless popcorn movie it is.

So, I'm watching it again now, pausing it as I type stuff.
Okay, so to start off, you see a limited view of the interior of this deepest water habitat.
Long hallways, big bathroom, lots of sinks, a house spider, drywall, drop ceiling and so on.
It never really says which year the film is set in but it better be 2120 or later.


At 7 miles below the surface, construction will not resemble a hotel. Structurally, open spaces at that depth at those pressures would require some very serious support.
Have a look at Cameron's Deep Sea Challenger 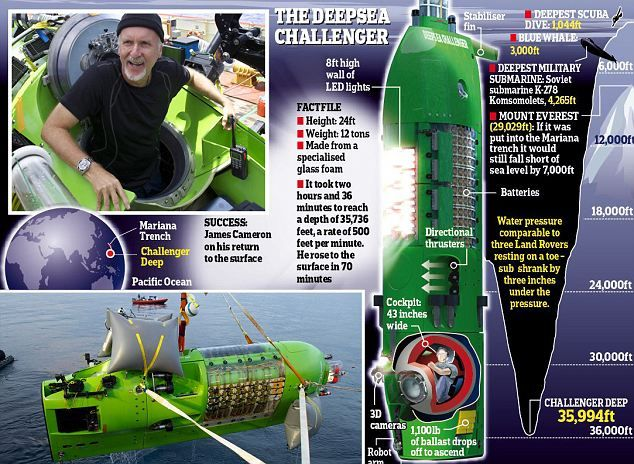 Open spaces are very limited.
The engineering technology and methodology would be impossible to build such huge elaborate structure on the floor in the deepest part of the ocean, even in the near future.
Then there is the shear magnitude of normal everyday objects populating the sets.
You might suggest the structures were built and fitted on the surface then sunk to the bottom but how are you gunna do that with so many empty spaces filled with air pockets?
We are expected this was done not once but at least three times? Plus connections between them?
Plus, before you say they just filled them with water, sunk them and then pumped the water out, think of the drywall, the electronics and stuff. Couldn't happen...ever.
Not without alien influence.
So, the tranquil teeth brushing doesn't make sense to rationality.

Then suddenly, lets put a bit of disaster and survival threat into the opening to get people excited. Maybe they will forget just how absurd everything has been so far.

She hears a leak.
She catches a drip with her hand.
Then all hell breaks loose.
Looks impressive if you don't know anything about pressure.


Not to go into a lot of detail, she runs down the hallway as the ocean burst into it.
She has time to travel quite a distance.
You see a long distance shot of people running towards them and the water crushing the hallway and they have time to close the doors just before the water gets to them.
However, at 8 tons psi, the air would be displaced, the water would crush the habitat like a car running over an empty can.
Immediately.
No time to look for a key card...and why would a key card be needed in such a dangerous habitat in the first place? Its not like strangers are roaming the halls. Everyone would have been trained on all the systems and nothing would have locks or access restrictions, especially anything related to such a vital safety system as a pressure door control.
Duh!
Granted, in any other setting the disaster and survival scenes would be good but not at the bottom of the Mariana's Trench!

So a few handfuls of popcorn washes away the writer's incompetence, for now.

just set the thing @ 150 feet.
I hear the monster is like Cthulhu (spoiler?)

I watched this another 2 more times since I started this thread.
I decided its not worth the typing.

Err...I guess if you kinda tilt yer head and squint.
Cthulhu is usually depicted as having man-like arms and legs.
A review video by someone obviously favorable to this film talks about the creatures towards the end.

This guy uses Lovecraft to justify his assertion it is a Cthulhu yet shows no screen captures to prove it. The fact it had tentacles on its head doesn't make it so.

This video calls it a Kraken type creature.
She considers both views. She makes some argument based on the insanity related to Cthulhu not being depicted in the plot.
Personally, I find it inconsequential because you don't really get a very good look at it.
You don't get a really good look at anything in the water.

I decided to download the film so I can take a screenshot of the monsters, because I do really like monsters.
When I get some screenshots posted to a host, I'll post them here in spoilers and we can discuss this with actual reference material at hand.

Okay, I took 125 captures of the creature. Might take me a bit to find the pics which offer the cleanest view. If I advance the pics manually it looks like a video of the monster only and has decent resolution but each frame is slightly blurry by itself.
I'll try to use the best four pics so let me see what I can do and then I have to upload them to pinterest so I can post them so Kevin doesn't have to host them.
A bit more time....

Okay, pinterest will not accept them.
They are kinda dark & fuzzy... 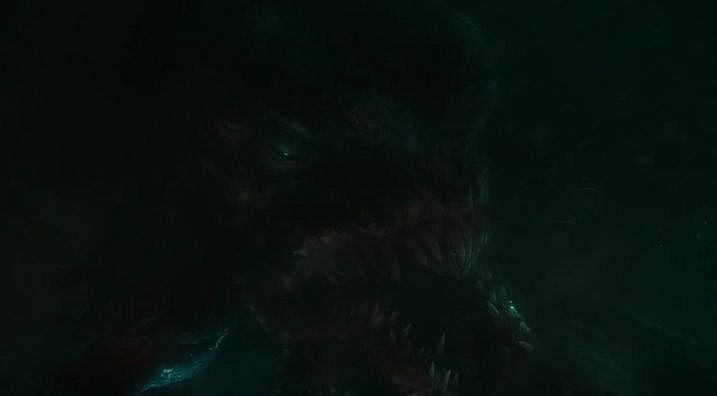 As far as I know Cthulhu does not have rows of teeth in its face. This lower toothy jaw splits open like Predator & the creatures in Blade 2 (reapers). 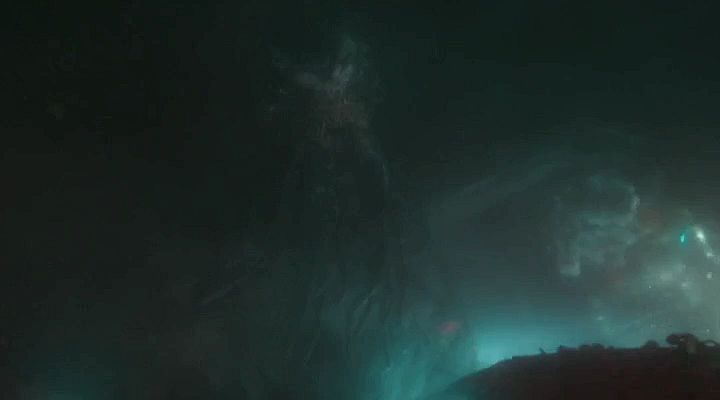 This one kinda looks like a Cthulhu if you saw the video. Off to the side there is a limb which could be a wing or another larger tentacle. Those teeth are definately not Cthulu tho. 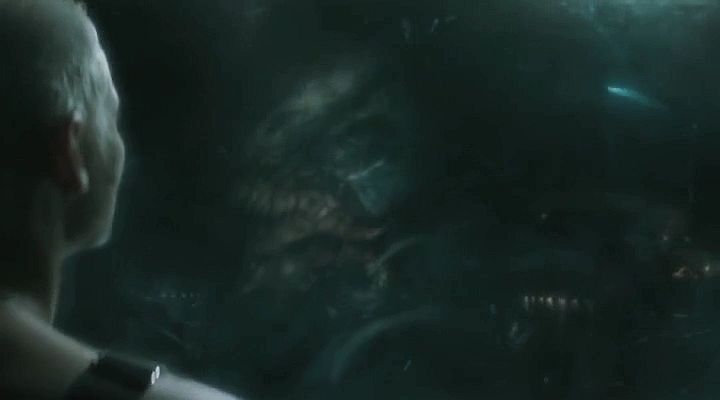 Here's a better shot of the head from a side view. See the teeth? See how the head is shaped?
See how the eye radius looks indented? 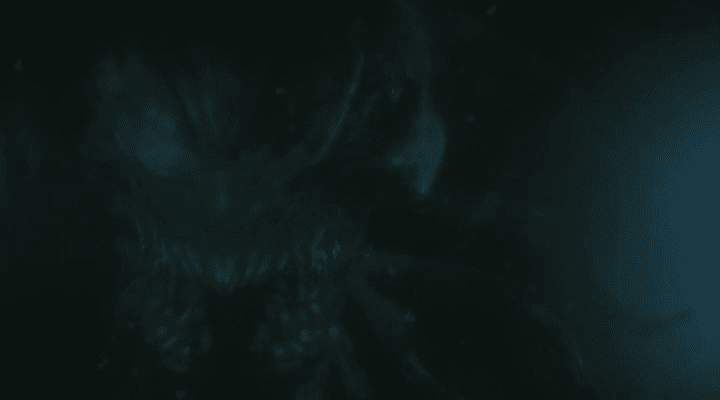 Again, the teeth and a straight on view of the nose and eye. In the video the eye blinks.
See the cheekbone? Split lower jaw..? 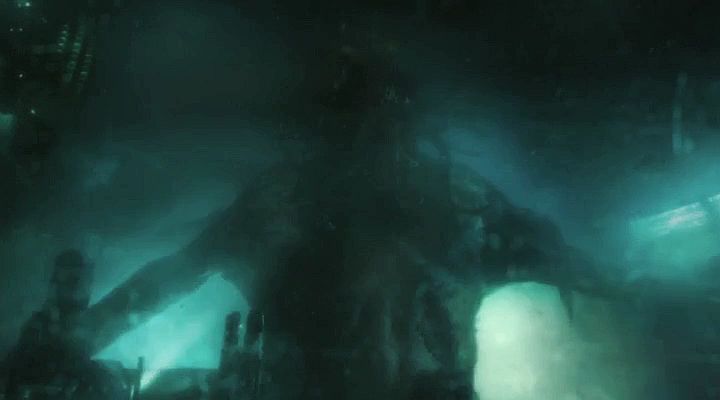 This view shows face tentacles, shoulders, an abdomen, and what looks like two arms that are actually tentacles. Looks and moves like a man in a suit.

All the shots and sequences are fast with short duration in the film. Its dark against dark with high action bright scenes before and after of the crew in the station or suit.
Cthulhu, no... Kraken, no...
The images themselves really don't spoil the movie unless the creature itself spoils the film for you. The images don't show what the creature does just that it exists and you need to be under a rock to not know there is a creature in it. Hell, the thread title even states "Creature Feature".