US right to bear arms backfires yet again on your children 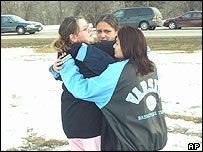 when are americans going to learn. ban the civilian possession of firearms, stop your children growing up thinking its alright to carry firearms and use them.

more to the point, stop kids from walking into their schools and killing other peoples kids.

we see the odd school death here, but not massacres by other kids, maybe one kid will get stabbed to death, but nothing wholesale like this.

columbine should have been your wake up call, but nothing appears to have been done legally. 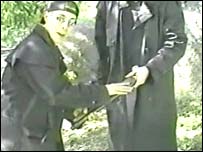 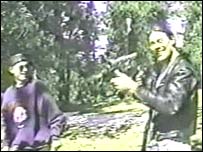 we even hear the families of the columbine victims are trying to sue the makers of violent computer games. we see this over here as an illogical lashing out. yes, violent computer games have a rating on them, so kids aren't supposed to own them, but parents buy their kids the games, some shops dont even realise the worth of the rating printed on the boxes. but the firearms are still the key tool in these incidents

now even your 10 year automatic ban on automatic firearms has come and gone and congress did not vote on a continuance, they didn't even bother to schedule a hearing!!!!

it's going to take most of americans to vote on the issue and remove the cause of so many of your childrens deaths, observe other countries problems relating to the firearms laws, permissive and not, then see that allowing the current american right to bear arms situation and the lack of action of the american public being partly to blame.

we brits will cry for the american kids, apathy over the situation leads us to believe you don't have the right to cry over your kids deaths by firearms if the american people as a whole cant ban civilian ownership.

how long must this go on, how many more of your innocents must die before you finally take the stand and remove the firearms?
R

You got one right there

I can agree with you on this one Mr.D we do have a problem here in the US. Too many people have guns. There is no need for this to go on over and over. Too many kids are dead AGAIN and too many parents still don't get it!

The US Constitution gives us the right to bear arms but it doesn't say that we have any right to own these awful killers of children. It doesn’t say GUNS!

I just hate seeing these stories so many times. I pray that this will never happen anywhere else ever.

I have a 10 year old in the 5th grade at our local public school and while it is so hard to imagine the possibility of this happening at his school, I know it could. I know that there are bad parents who have guns. I know that there is no safe place to keep a gun if you have a kid. Kids get into everything! It is inconceivable that the legislatures can't pass laws to ban these weapons.

i was raised in a military family. at 6 months to 3 years old we had a browning HP pistol, at 10 years old i cradled a sterling submachine gun my hands, what a heavy piece of ugly black death dealing machinery that was. at 12-14 we had another browning HP. i never had any interest in going finding the guns and playing with them. they were a part of my fathers job and not toys, i had no facination with them.

as an infantryman then an anti tanker my personal weapon was an l85a1 bullpup, used gpmg's, law66's, law90's, Milan wire guided missiles.

i learnt how much skill you need to operate the weapons, the odd rounds flying past your head, rounds misfiring badly, misfired ordnance, hell, i've even almost shot myself in my foot on a range on a shoot and run as i was exhausted.

for me to comprehend how someone who isn't highly trained and experienced with weapons could want to use them for fun, fashion or street cred is ludicrous. an untrained user is likely to shoot himself or someone innocent accidently.

in my grandparents street in one city over in the UK where there is maybe too much gun crime by drugs gangs, two gangs, 4 in a car, drove up and stopped in the middle of the street and started firing at each other. not one criminal was shot, but a 14 year old girl looking out of her second storey bedroom window to find out what the noise was got shot through the head and died.

a pistol, whilst stood up and in the hands of a marksman, is capable of hitting a full size stationary target at no more than 25m. i've fired it at 30m and know i can only hit 2 out of 8 times, our marksmen trained buddies could only hit 4 out of 8 times. and thats rounds put into the full target, not saying where it will hit!

with a rifle, thats supposed to hit stationary half size targets at 400m effectively, fitted with a 4x telescopic sight, i can hit 6 to 8 out of 10 times at 600m

the hollywood films aren't doing firearms accuracy much good, maybe they should emphasise where the rounds go that miss the obvious targets!
weapons for the army and special police units, but not carried round in public view, no civilian ownership of anything but a farmers license for a shotgun to get rid of vermin.

i really appreciated what michael moore did with the chain store selling rounds of ammo that hit the columbine kids, the staff being faced with a kid pulling his shirt up and saying, "that round there was like the one that the scar here is from, and that round there.........."