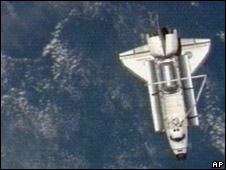 The space shuttle Endeavour has returned to Earth after an eventful mission to repair parts of the International Space Station (ISS).
The shuttle's landing site was switched from Florida to Edwards Air Force Base in California due to bad weather.
The shuttle touched down safely at around 1425 local time (2125GMT).
The mission had been extended by a day because Nasa wanted the shuttle's crew to make repairs to a machine which makes drinking water from urine.
Lost tool bag
The mission saw the shuttle and its crew spend 16 days in space.
The equipment to provide drinking water from astronauts' urine has failed several times since it was delivered two week ago.
Astronauts also took part in four spacewalks to repair a mechanism meant to keep the station's solar panels pointed towards the sun.
The work was slower than expected because astronaut Heide Stefanyshyn-Piper lost her tool bag during the first spacewalk.
Inside the station, ISS commander Mike Fincke supervised work on the malfunctioning water regeneration system which distils, filters, ionises and oxidises wastewater - including urine - into fresh water.


Earlier, the system's centrifuge - needed to separate solid particles from liquid as part of the distillation process - became unbalanced as it spun and shut down before the intended four-hour cycle was complete.
Nasa needs the new system operating before it can expand the station's crew from three to six people, which is currently scheduled for May 2009.
The extended mission meant Endeavour's crew celebrated Thanksgiving in space and did not leave the station until Friday.
Endeavour's mission is the fourth and final orbiter mission of 2008This article is from the BBC News website. © British Broadcasting Corporation