It appears people are still susceptible to mock up shows! 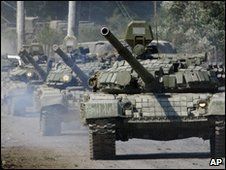 Momentary panic was sparked in Georgia after TV broadcasted the news that Russian tanks had invaded the capital and the country's president was dead.
The national network report - with echoes of the 2008 war between Russia and Georgia - turned out to be false.
However, mobile phone networks were overwhelmed with calls and many people rushed onto the streets.
Imedi TV said the aim of the report had been to show how events might unfold if the president were killed.
For a brief moment on Saturday evening many Georgians thought history was repeating itself.
Click to expand...

With the original radio play War of the Worlds the radio station did air warnings every so often saying it was only a play and nothing to worry about but that didn't stop people panicking everywhere and running for the hills/bunkers.


Special Bulletin was a news anchor style film aired in the 80's that freaked people out thinking a nuclear weapon had gone off in a US port. It had a lesser effect, but the survivalists were out in force running for safety.


Now it appears a tv station in Georgia has made a faux pa by airing a mock up of what would have happened if the Russians had driven in, killed their President and taken over the country. Even with the aired warnings it looks like people are very angry right now. With the loss of life during the brief conflict this may be understandable.

It goes to show that you cannot assume a certain behaviour in your audience. In the UK fliers/brochures advertising services and products that are put through peoples doors/letter boxes are generally aimed at a reader with the reading ability of a nine year old. This aim might be in some small way to prevent such as this.


There are many in media who try to make things go viral to put ideas, products and services in the eyes of the public. They are trained to do such and probably have a list of things you do not do. This incident in Georgia I am sure is about to be added to that list. No longer is the literary quality of War of the Worlds radio story or Special Bulletin film a valid tool to use where "no one gets hurt".

War of the worlds

7
Sci-Fi Victorian War of the Worlds