Music What Are You Listening To?

Staff member
The Church - Under the Milky Way

"The Band" - The Band. Their second album. It's a copy my dad recorded from his vinyl copy to a CD years ago.

Just had the song "Whispering Pines" on. I love that one.

RH1 said:
"The Band" - The Band. Their second album. It's a copy my dad recorded from his vinyl copy to a CD years ago.

Just had the song "Whispering Pines" on. I love that one.
Click to expand...

Just realized that, surprisingly, I don't have much of The Band in my various playlists. I now know what I'll be listening to while working tomorrow. 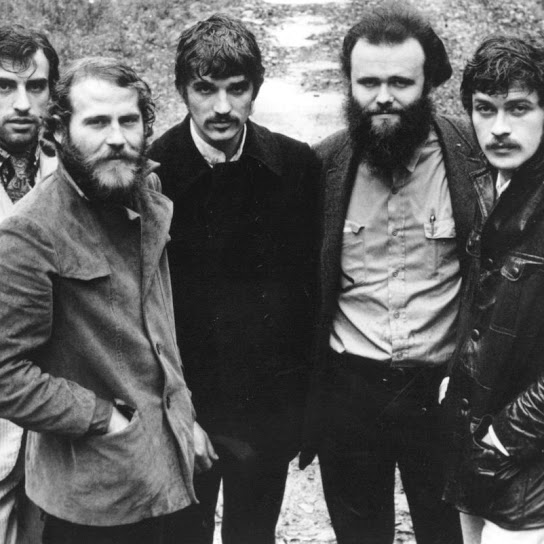 A new music service with official albums, singles, videos, remixes, live performances and more for Android, iOS and desktop. It's all here.

I'm making a rather short playlist for when the kids get here.
It'll be a mix of music (no rap!) taken mostly from movies and tv shows for the kids.
I'll throw some metal in there for my sons and a bit of country for their wives.
Plus a blues song or two, just to expand their horizons a bit.
(I'm expecting two of my kids families at the end of the month, 14 people)
I'll be playing it in winamp with a modified milk drop visualization.
I'll also have two small players in either top corner playing current movies on mute in separate playlists.
Not too loud but loud enough for the tones to sound true. Still wanna be able to talk.

The first one is set up.
I started two movies muted at either corner in small players.
I opened winamp and set the visualizer to milkdrop.
Started a song...hid desktop icons 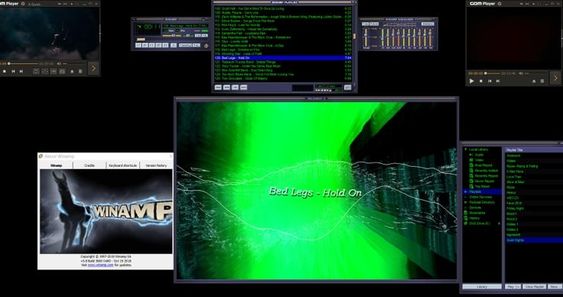 Here's what it actually looks like while playing.
Not only does the music continue on the playlist, each movie player's playlist plays continuosly.

The (moving) image you see fills the TV screen and the music is thru my surround sound system. 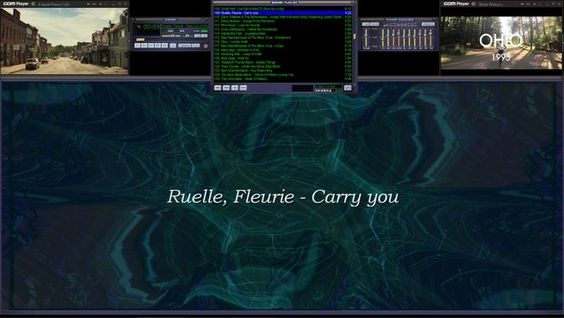 On weekends, I usually make milkdrop full screen and light the room with candlelight.
My GF and I both like it...a lot!

In milk drops, I modified the sprites, timing, duration and color depth among other settings. The trick is to remember where you set them when they work in case you make a mistake. I'm set for 520 transitions right now.

Can't find Bed Legs - Hold On thru youtube.
Here's another
Bed Legs - Back On Track

another view of a song which is based on a [movie] 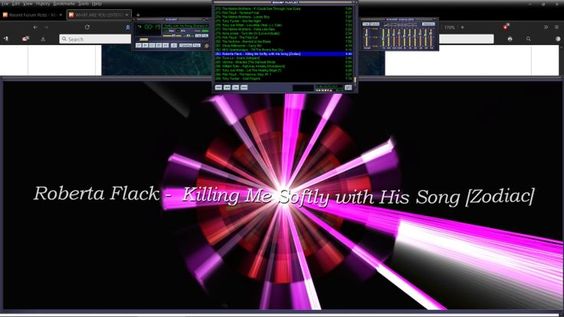 and another, based on a song found in a [movie] 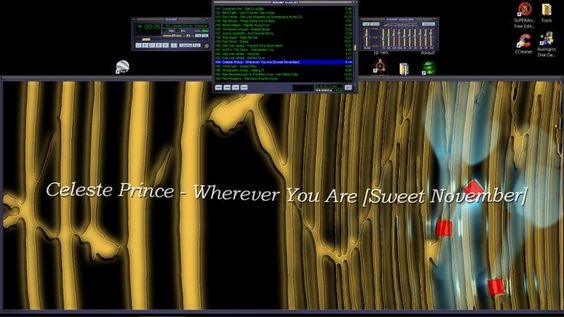 Staff member
Back in the late 90's I was working for the East Coast headquarters of a division of an oil company. Still maintain some friends from then and is where I met the future Mrs. Kevin. The crew from back then ended up in various parts of the world and in a wide range of careers. One of them was Charlie Degenhart who left the corporate world to be a full-time musician. He never quite broke through to the mainstream but continues performing at venues of different sizes and releasing the occasional album. Over the years he relocated to Tennessee so it's been quite some time since Mrs. Kevin & I have seen him perform but his 2004 CD April's Fool still gets a few hits in my casual listening playlist.

Tom said:
I'll be playing it in winamp with a modified milk drop visualization.
Click to expand...

You using that with Win10? On my Dell XPS the resolution doesn't place nice with WinAmp and I've never seen a solution. Because of that I've switched over to MediaMonkey as both my MP3 organizer & player.

Kevin said:
You using that with Win10?
Click to expand...

Yes, I bought a gaming system with a higher end graphics card, not for gaming but because I stream and watch loads of movies (plus I still game a lil). I also do a bunch of amature graphics projects (remember, I'm disabled and have plenty of time now).

The winamp is the newest version made for win10 and milkdrops is actually milkdropsV2.
I've also tweaked my system graphics settings a bit and my TV is set to the better picture setting and sound.

I hated win10 when I first got it but I'm rather pleased with it now that I have all the invasive junk shut off. I'm due for a higher end TV purchase soon but with fixed income that's not a priority.

Playing two movies in separate players + winamp with milkdrops I can also zip 5 or 6 large files at the same time and nothing slows down. I have a powered usb hub, 2 - 4tb external drives and one 6tb drive, a camera and a dvd ripper hooked up while I do this. The only thing which taxes my system is when I try to play certain games at max settings.
I paid $850 for the system and I am pretty happy with its performance so far.

Just in case ya missed it, here's another...

Staff member
For those who've seen the Amazon "Cleopatra" commercial and have been wondering, it's a song from 1979...

luxefaire said:
saw uriah heep at hollywood sportotorium in florida a long time ago, they opened for kiss believe it or not. memory is slightly cloudy now about those times, but pretty sure. it was one of my last concerts, by that time i was coming out of them with major headaches, and left it to the younger crowd. the wiki writeup on uh is extensive! i am glad all this history is getting written down....b
Click to expand...

Dude total jelly over here. Would have loved to see this concert.

11pm, finishing a particular good sav blanc, some more relaxing tunes to round the night out with here.

Staff member
And some more, love this song ...

Love the chick in this movie, and surprisingly their relationship

From the Opening scene of Tales From The Crypt: Demon Night (1995)

Not my usual listening style but will try it out for my walks.

Staff member
Working on some code, ended up down a rabbit hole of 90's music.

Azhria Lilu said:
What are you listening to right now?
Click to expand...

"Endless Summer" by the Beach Boys

I haven't come across her before; after listening to the song I'm surprised she hasn't shown up over here in the US yet. Or I'm just really out of touch with today's pop music and she's already known over here.

9
What album are you looking foward to?

L
What cd are you looking forward to the most?
2