What are your thoughts of the 2012 scenario

y2k was based on the fact that anything electronic that calculated time and dates would not work after the year 2000. for years previous governments and companies knew that changes in software needed to be done and it was done with very minimal consequences. yes the fears that the "world was going to end" was out there and fanatics believed it and procured that notion for their own purporses which got alot of people believing it.

in this case though. it is not just about the mayan calendar ending. it is also about a rare juxtapostion in the planets, that alignment between the earth, sol and the galactic center. the speculated forces that will be put upon us, the sun and any other celestial body will be unknown till that time. for those that dont know. the galactic center is a massive black hole. the stressers just from that alone will be enough to tear up anything.

whether nothing happens or the world stops spinning or rotation reverses itself or the poles shift is something to see.

for me, i do hope nothing happens then i can start writing about the next phenomenom that will happen.

interesting coincidence--the galactic alignment AND the Mayan calender AND the Christian/muslim prophecies, all in this narrow window.
but, as it's been said (Asimov?), it would be an unbelievable coincidence if there were no coincidences.
It is kind of spooky to read Matthew 24 and compare it to today.

I actually want something to happen. It would make me realize that not everything is so "Hollywood", and something real is out there.

i agree my friend. we are all so "hollywood" mesmerized by all this that if it did happen or if zombies were to be or if aliens landed that everyone would blame hollywood first and think it is a hoax.

not trying to sound so pro-apocolyptic here but everything is so dramatized in media that i think the only ones who would have a level head at the start of some disaster would be the ones who think about it alot and plan in their minds or on paper what and when to survive.

i found this also in a search on the web.


So apparently the world might get snap frozen again on 21st December 2012 with the return of this thing that's on a 3600 year orbit around the sun. If you want to survive the apocalypse:

- move to the inland side of the mountain range, further if you want a buffer. There may be tidal waves.
- bring seeds and plants of the edible variety, camping gear (kettles, flint, knives etc) and fishing gear and bows (and learn how to use them) if you eat meat
- bring chickens, other livestock if you're game
- gather stuff for building and energy connection etc
- glomp people you like and drag them along
- start early so you can take the four years to get comfortably established

It'll be like a long camping trip! Aww come on, it's not that bad, who wouldn't want to live in a hippy commune environment. And if everything is set up nice and early we could even have plumbing and elecriciy and net access!

Or if you're not into the doomsday scenarios laugh at the silly pranoid people and hopefully this will blow over just like all the other ones. In the meantime, consume less!

painkiller64 said:
i agree my friend. we are all so "hollywood" mesmerized by all this that if it did happen or if zombies were to be or if aliens landed that everyone would blame hollywood first and think it is a hoax.

not trying to sound so pro-apocolyptic here but everything is so dramatized in media that i think the only ones who would have a level head at the start of some disaster would be the ones who think about it alot and plan in their minds or on paper what and when to survive.
Click to expand...

ours sadly seems a dumbed-down lowest-common-denominator culture, seemingly run by and for sex-crazed, potty-mouthed 20something slackers, so jaded that nothing less than BIG SCARY EMERGENCY!!! will attract their attention.

or am I stating the obvious?

ours sadly seems a dumbed-down lowest-common-denominator culture, seemingly run by and for sex-crazed, potty-mouthed 20something slackers, so jaded that nothing less than BIG SCARY EMERGENCY!!! will attract their attention.

or am I stating the obvious?
Click to expand...

you have stated it perfectly

Yes you have. It makes me laugh when I look at how our cultutre so much reflects on what the media has published. Sci-Fi is strictly for dorks, Horror is for freaks, and for some damn reason, WHY IS GHETTO IN?!

Anyone care to explain?

when i can figure out what "ghetto" is, then i would be happy to explain.

i checked out a couple of sites and what i read from other peoples comments is that "ghetto" means either that your stupid, trashy, poor or as another person put it that if you walk on the street and the wind blows your hair out of place someone might say "thats so ghetto".

there is lots of references to the jewish concentration camps of the WWII era as they were called ghettos then.

so i think it is what anyone wants to interpret it as.

I mainly think that being "ghetto" is the damn medias fault, and everwhere I go I hear ebonic language, slang, and just piss poor grammar. This truly is setting our human development as a species back, because it is just plain dumb. Go MTV! Go VH1! Go Nikelodeon! Go People Magazine!

Maybe this is the start of the apocalypse? lolz

i dont think it is setting the species back, actually i think it is boosting it. considering that a very small percentage of the population speaks ebonics, slang and anything else to butcher the language that it causes the rest of us to use a little more of the brain to compensate and be better humans.

we may look at hollywood as being the downfall of humanity yet without the influx of media we actually would be on a downward spiral on the evolutionary map.

just because eve ate the apple (she must have been blonde LOL) and in religous circles she was the downfall of mankind, yet we have put women on a higher pedestal than even man could put himself.

or, if caveman had not burned himselfin that first fire and figured out that he just jumped the evolutionary scale by a few thousand years then we wouldnt be where we are at today.

try this experiment. if you can, find a nice comfy, quiet spot. lay down, close your eyes and picture the one thing that you really want to do. think how peacful it is and you will be surprised that you will feel like your floating. you will find after that that you have aquired more space in your brain and will have clearer thoughts and you will have jumped the evolutionary scale even if only by a fraction of a minute.

My favorite thing about the y2k scare was a tv show suggesting that earth's gravity might somehow be increased. They suggested keeping a skateboard in your house to roll yourself to ground level canned food. The actor showing all of this looked like grizzly adams.

The entire "2012" scare (not the election one, the lesser calamity known as End Of The World) is completely misunderstood.

On the one hand you have this whole "disaster movie" thing. The whole "our consciousness will blend into the center of the Milky Way and become a soft, chewey vanilla nougat" thing.

Then there's the whole. "Nothing. Nada. There's no such year. Nothing to think about here. Move on. These are the droids you're looking for" thing.

In fact, it's a vital event/consciousness that's only a few years away. And the key to it all (and here's where we'll lose a few tight-assed skeptics) is Mayan Calendar Girls. Ever been in a auto shop? Wall covered with calendars. You think those grease monkeys care what day it is? It's all about Calendar Girls.

We're painstakingly recording and reporting the whole thing right here on the website easily clickable to below. Don't put it off, there's little time left.

Here are a few ideas about the 2012 scenario/doomsday prediction/ELE/whatthehellever. I don't have any scientific evidence for any of this but since the premise of time itself is actually scientifically unsubstantiated..oh well.......
1. How many years in advance were the poor bastards supposed to design a calendar? I have a calendar on my wall here that ends Dec. 31st 2009, OMG does that mean we won't have to worry about 2012????? Maybe just maybe they figured they had designed a calendar that simply went far enough, after all they have been gone for how long now?

2. Could be that the calendar is a countdown to an event other than the end of the world. Maybe it took into account relitivity and our alien teachers are simply expected back on that date....WOW!

3. Maybe they had a calendar that started a new count and archeologists simply haven't found it or never will. I don't think it's a stretch to assume that we haven't found every piece of Mayan artifacts yet or that alot of it was just destroyed.

4. Maybe they assumed that at that point mankind would discover cold fusion, the secret to immortality, infinite wisdom and evolve from a state of matter to a state of pure energy and would no longer even need a calendar.

5. I have a few more but these should give you all something to laugh at for awhile, lol.

I'd say this recently discovered artifact reveals much more of the calendar's true purpose.

Anybody looked over that Team 2012 site much...pretty funny. 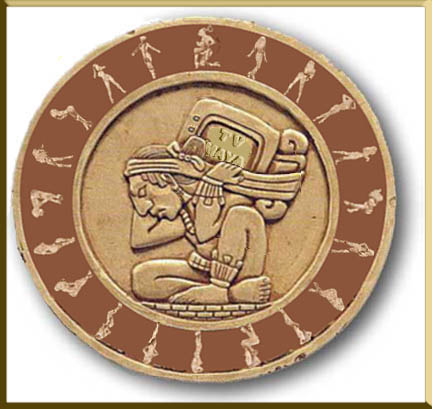 Some believe that 2012 is not an ELE but is a change in the current Age. We are moving from the Age of Pisces to the Age of Aquarius and the change of ages will bring a new level of awareness to the human race.

I think the Mayans ran out of space on there tablet...

linrobinson said:
I'd say this recently discovered artifact reveals much more of the calendar's true purpose.

Anybody looked over that Team 2012 site much...pretty funny.

i like this. maybe this was a special coin to get into the mayan playboy mansion or maybe a coin that got spent on a stripper in a mayan club. hmmmmm, makes ya wonder.

just for thought, look how the weather has been changing or not changing as it should be as we are used to. where i am at just a week ago we had a few days of fall\winter weather and i am in kansas. that is truly odd for us. yes there are weather changes and ice caps melting and new threats of oceans rising that is causing a recent stir and that adds to the paranoia of the 2012 craze.

all i will do is sit back and wait for that day to arrive and pass and wonder what the new craze\phase will be after that.

What are your views of heaven and hell within the science fiction universe?

B
What are the names of your siblings?
2 3

What Is Your Favorite Field of Science?