I seriously doubt RealPlayer allows custom skins...they probably don't even have custom skins. I hate that program, sorry.
I used to have "Skinner" (Classy, is that what you use?) but for some reason, it didn't want to work with my old computer. I'm try to download it again onto my new laptop o I talked about downloading!!! Don't worry, lol, its up for a free download on its site. )

i use have it... dang computer...why do they have to crush..those look really good
C

Hey Tommy, yep, I use skinner. And I have some I would like to send to AllAlias if they'd like some.
T

clarissima said:
Hey Tommy, yep, I use skinner. And I have some I would like to send to AllAlias if they'd like some.
Click to expand...

I'm sure Charlie would love some to post on the site ( I don't know if he would want them here or make a page on the archive for them ) Send them to him at charlie@allalias.com

Yep, email me at charlie@allalias.com

Earlier this week Nullsoft released v5.0.9.1 of Winamp to their forums only to have it pulled a few hours later. They posted a message simply saying "Sorry, but due to *legal* issues (don't ask) 5.091 has been temporarily pulled and there should hopefully be new official builds available sometime next week"

Available from the main winamp website as well...
Note the download links are for 5.091 and the date stamp lists 20th May.

This is the 'Fixed' update

Well, I might be breaking the record with the oldest thread resurrection with this one!

Winamp 6 is supposedly being released in 2019! Yes, you read that right, Winamp is not only still around but might get a new major release version!

For those that may not remember, or weren't around back then, Winamp used to be *the* app for listening to MP3 files. It started life in 1997, ancient history when it comes to 'internet time', but it soared in popularity and still has a usebase even to this day. Frankel sold his company, Nullsoft, to America Online in 1999. America Online was rebranded to AOL around 2000 when it merged with Time-Warner. Nullsoft, under the ownership of AOL, shed most of its products to concentrate on Winamp and had a following of tens of millions of users, estimated to be about 60 million at one point. In the mid-2000's Nullsoft became a division of AOL Music. Unfortunately Winamp, under AOL, never was given the support it needed to take on the likes of Apple's iTunes and then streaming services. By 2014 Winamp had become nearly a forgotten item; it still had users but no where near the usage it once did. What remained of Nullsoft, including the Winamp assets, were sold to Belgian company Radionomy. AOL itself was split off from Time-Warner in 2006 before what was left of it was acquired by Verizon in 2015.

Under Radionomy there has been almost no action with Winamp since they acquired it. The last publicly released version of Winamp dates back to 2013 but updated beta versions (Winamp 5.8.x) found their way to the hands of dedicated users.

Now, nearing the end of 2018, Radionomy has announced that they're not only trying to revive the Winamp brand & software but will be releasing Winamp 6 in 2019!


“There will be a completely new version next year, with the legacy of Winamp but a more complete listening experience,” said Alexandre Saboundjian, CEO of Radionomy.

“You can listen to the MP3s you may have at home, but also to the cloud, to podcasts, to streaming radio stations, to a playlist you perhaps have built.”

“People want one single experience, I think Winamp is the perfect player to bring that to everybody. And we want people to have it on every device.”​
The formerly beta 5.8 release, compatible with Windows 10, is expected to be formally released as a free app again and then have a 6.0 release in 2019. The 5.8 release is still the 'classic' app but with bug & compatibility fixes and all of the "Pro" paid features unlocked. Official clients for iOS and Android are planned to coincide with the 6.0 release.

While there will be a desktop client yet the emphasis will be on the mobile clients and tying together the various source of music & audio that today's typical mobile user might be listening to.


"You can listen to the MP3s you may have at home, but also to the cloud, to podcasts, to streaming radio stations, [and] to a playlist you perhaps have built," Saboundjian was quoted as saying. "People want one single experience. I think Winamp is the perfect player to bring that to everybody. And we want people to have it on every device."​
What I found interesting is the inclusion of "to a playlist you perhaps have built" as part of the description of the planned revival. If they are able to build a client that could unify being able to use your own playlists from a variety of other streaming services in a single spot then that could be a huge game changer.

I primarily use WMP right now but I do use winamp at night for their nullscreen tiny visualizer. I really like how it looks on the big screen.
I also have a streamripper that still works with my winamp and rip streams of shoutcast radio and HBR1 IDM transponder. 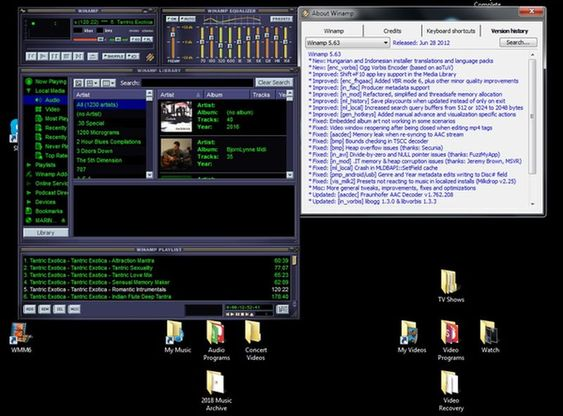 Well, I tried installing the Winamp 5.8 beta on my home laptop. That didn't go too well as apparently it can't handle scaling for high DPI monitors like on my Dell XPS. The player is so tiny that it is barely recognizable as being Winamp.

I did some searches on Google to see if there were any fixes but nothing concrete. Guess I need to either wait for an updated release or the 6.0 release before I try again.
You must log in or register to reply here.
Share:
Facebook Twitter Reddit Pinterest Tumblr WhatsApp Email Link