NASA Picture Of The Day
Winds of Change 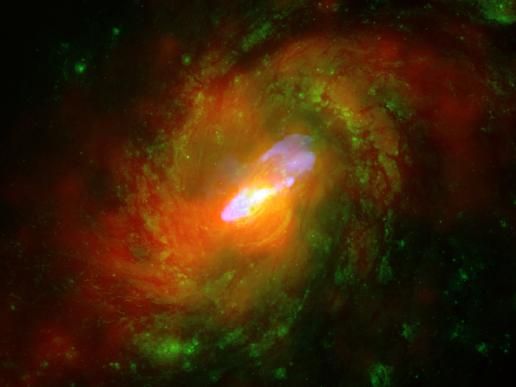 This is a composite image of NGC 1068, one of the nearest and brightest galaxies containing a rapidly growing supermassive black hole. The X-ray images and spectra obtained using Chandra's High Energy Transmission Grating Spectrometer show that a strong wind is being driven away from the center of NGC 1068 at a rate of about a million miles per hour. This wind is likely generated as surrounding gas is accelerated and heated as it swirls toward the black hole. A portion of the gas is pulled into the black hole, but some of it is blown away. High energy X-rays produced by the gas near the black hole heat the ouflowing gas, causing it to glow at lower X-ray energies. X-ray data from the Chandra X-ray Observatory are shown in red, optical data from the Hubble Space Telescope in green and radio data from the Very Large Array in blue. The spiral structure of NGC 1068 is shown by the X-ray and optical data, and a jet powered by the central supermassive black hole is shown by the radio data. This Chandra study is much deeper than previous X-ray observations. Using this data, researchers believe that each year several times the mass of our sun is being deposited out to large distances, about 3,000 light years from the black hole. The wind likely carries enough energy to heat the surrounding gas and suppress extra star formation. These results help explain how a supermassive black hole can alter the evolution of its host galaxy. It has long been suspected that material blown away from a black hole can affect its environment, but a key question has been whether such "black hole blowback" typically delivers enough power to have a significant impact. NGC 1068 is located about 50 million light years from Earth and contains a supermassive black hole about twice as massive as the one in the middle of the Milky Way Galaxy. Image Credit: X-ray (NASA/CXC/ MIT/C.Canizares, D.Evans et al), Optical (NASA/STScI), Radio (NSF/ NRAO/VLA) (More at NASA Picture Of The Day)