GRAND JUNCTION, Colo. (KKCO) - A woman claims she spotted a vampire on the road ahead of her and it made her back her car into a canal around 11 p.m. Sunday.

According to authorities, the woman was driving on a dirt road at K and 20 Roads near Fruita when she says she encountered the vampire.

She says it scared her, and she threw her car into reverse, backing it into a canal.

She was not injured. Her husband arrived on the scene and took her home. Troopers do not suspect alcohol or drugs to be factors in this accident.

They added that they found no evidence of a vampire.
Click to expand...

OK, guys/gals, if there was no alcohol nor drugs involved, what's your theory? Was it really a vampire in the middle of the road waiting for an unsuspecting victim?

OK, guys/gals, if there was no alcohol nor drugs involved, what's your theory? Was it really a vampire in the middle of the road waiting for an unsuspecting victim?
Click to expand...

You just made my morning

I haven't heard that claim in a while, usually it's, "I saw a GHOST! AHHHHHH!" First of all, how did she know it was a vampire, by the way it was dressed (like Dracula) or did the individual show her it's fangs?

If she is telling the truth, she could have been the victim of a prank.

Maybe she saw a creature that resembles a bat-like monster, like something that is still causing CATTLE MUTILATIONS (blood drained carcasses of livestock with body parts missing), which is still a problem in the United States. I thought about creating a thread about that but.....it's so gruesome to talk about and show photographs of the poor dead beasts.

Or....she coould have made the whole story up because she was afraid and embarassed to tell her husband that she lost control of the vehicle.

I just hope it's not a publicity stunt for a movie, I'd be disappointed.

Maybe, just maybe it was someone in a costume commuting to a party? Or someone out walking at night and her headlights bleached his face out and made him look scary as he raised his hands in shock himself as he was blinded and thought he was going to get run over?

Staff member
I am starting to wonder if there is something in the water in Colorado. First we have a vampire causing a woman to have an auto accident and now.... now leprechauns are running wild at grocery stores.

COLORADO police are hunting a man who ran riot in a supermarket parking lot dressed as a leprechaun.

A witness called cops in Boulder, Colorado, on Wednesday to report a leprechaun jumping in and out between cars, pretending to shoot people with his fingers and making obscene gestures, The Daily Camera reported.

Sergeant Fred Gerhardt told the newspaper: "I think that's why they called us. He was acting bizarre."

But when cops arrived at the scene they could not find the little green man, or any other witnesses.

Sgt Gerhardt said it was the first time police had received a complaint about a leprechaun.
Click to expand...

Kevin said:
I am starting to wonder if there is something in the water in Colorado. First we have a vampire causing a woman to have an auto accident and now.... now leprechauns are running wild at grocery stores.

I don't think its' just the water, Kevin. It's the water and the higher altitudes in Colorado that are combining to make some pretty bizarre tales...............

If you ask me it's the climate changes that are driving everyone insane. I've already told my wife if I start howling at the moon she has permission to stuff me with silver.

Seriously though these situations are probably common since the beginning of time but instead of being considered crazy they became healers, priests and important figures in society.

The shoes on the other foot here:


Concerned motorists rushing to a car that had flipped over near Portland, Oregon came across a scene that made them fear the worse, according to KGW News. Covered in blood with their clothes ripped, the passengers in the vehicle looked as if they had sustained serious injuries in the accident.
It was not until later that it emerged that, instead of being seriously hurt, the five victims – on their way to a fancy dress party – were actually dressed as zombies. ”We’re glad that everyone is alive, despite being ‘undead’,” said Sgt. Greg Stewart. The ‘zombies’ were taken to hospital, but with non-life-threatening injuries.
The Foreign Desk will regularly post a link to a peculiar story that fell off the bottom of – or never made it on to – our morning news list, but which we thought you might like to know about anyway.
Click to expand...

Tim said:
The shoes on the other foot here:

For some reason I can't help but chuckle at the scene of the EMTs trying to treat the wounds and the people going "No, hey.. stop that, no, stop. That is supposed to be there!"

Kevin said:
For some reason I can't help but chuckle at the scene of the EMTs trying to treat the wounds and the people going "No, hey.. stop that, no, stop. That is supposed to be there!"
Click to expand...

Sometimes a lot of blood isn't a sign of major injury. After consuming too much alcohol and having a lad sit on my head on a gravel road whilst playing a game of imaginary rugby, my spectacles scratched down my eyebrow and cheek causing bleeding that made me look like one of the aforementioned zombies.

I was wobbling down the street trying to report to the military base we'd been sent to, before curfew, and I must have looked like something out of a horror movie because a lad grabbed me and dragged me to a phonebox, "I'm a second year medical student and you look really bad!" Cue ambulance turning up, me waving from the pavement and shouting, "I think you're looking for me!" A trip to an anonymous hospital without one mirror to examine the damage to get a few stitches, a taxi ride to the base (the driver seriously ripped me on the fare) and I got in 6 minutes under curfew.

I ended up getting disciplined for (involuntarily in my opinion) using a civilian hospital whilst on army time, haha. I feel I could have gotten to the base and finally seen to by understanding army medics (providing a taxi driver let me in his car of course) I ended up letting my company medic take my stitches out in the dormitory when they were due out, without an anesthetic, because it was too much hassle travelling to a medical centre and I didn't want to waste anymore time. 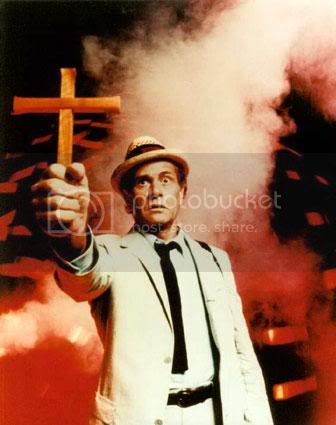 Well, any new info on the VAMPIRE sighting which lead to the crash?​

Staff member
The Vampire covenant has apparently branched out to New Zealand....

A teenager told a New Zealand court that he saw two people accused of attacking him sucking his blood, The Dominion Post reported Saturday. The victim, who has not been named, told a court in Wellington: "I thought the life was leaving me."

James Brooks, 22, James Orr, 19, and Xenia Borichevsky, 19, have been charged with wounding with intent to render a person unconscious following an incident in the nation's capital city in February.

The victim suffered bite marks on his neck, chest and arm and was later admitted to hospital for five nights after a bite on his chest became infected.
Two of the accused -- Orr and Borichevsky -- have been committed for trial, while Brooks has pleaded guilty and been remanded for sentencing.
Click to expand...

Paranormal Reason for stealing a semi-trailer truck & crashing into other cars on the freeway? Zombies!