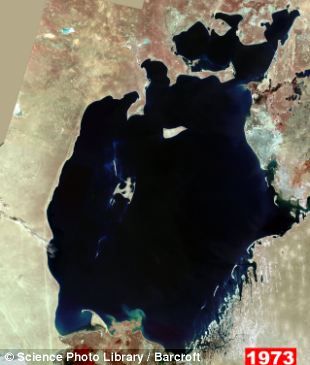 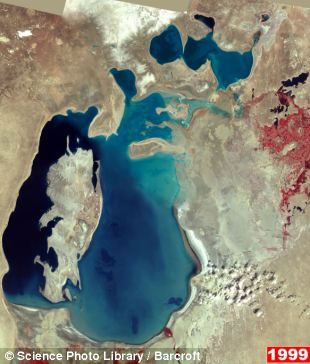 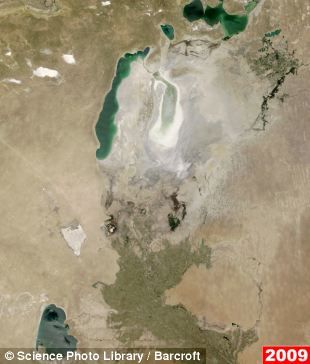 Recently I've read what is happening in rapidly industrialising third world nations where the water needs of manufacturing are sucking away the water the people living there need.

Here, we see how tapping the water running into the Aral Sea has left it with a drought so large that geography has been obliterated, leaving contaminated small stretches of water.

This should never have been allowed to have happened.

Saying this should never have been allowed to have happened is very easy to say but in reality it is never as simple as that.

According to a documentary I saw not long ago the reason why the Aral Sea is disapearing is because the Russians diverted the rivers for their irrigation projects, by building canals in the deserts within the Soviet Union to take water to their new farms. This was done in consequence to the drought of 1946 and the famine of 1947.

Taking into consideration the time when it was built and the political situation inside the Soviet Union it would be pratically impossible to have stopped it form happening.

At the moment efforts are being made to restore at least part of the Aral Sea. 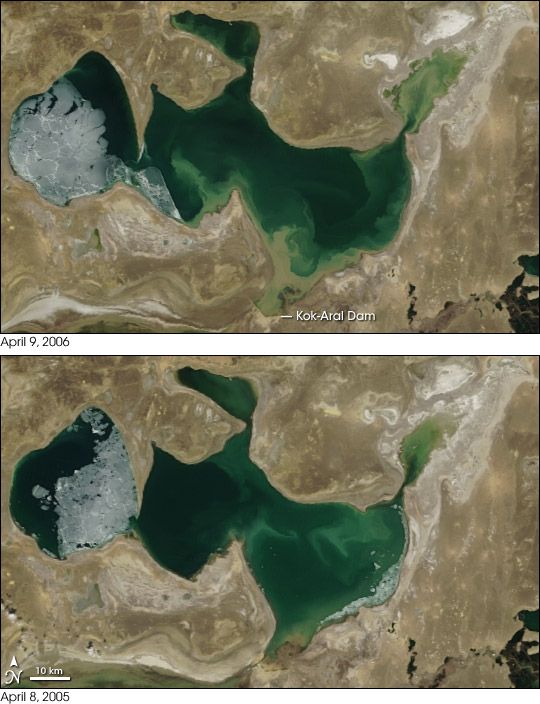 These are images of the North Aral Sea where a dike was built to try and restore the sea. Admitedly this will take time and money (as we are all well aware there's not much of that these days) so it may dry up in the end with the restoration efforts abandoned.
F

It is a real tragedy not only for the country where the Aral sea is situated but for the planet without any doubts.

Oh man! What a tragedy! At least its not filled with oil like the gulf right now I dont know why, but all this lake talk is making think of the trailer on tv right now for Piranha 3d. Crazed piranhas ruin spring break and take over a lake fill with spring breakers. Looks like the movie is filled with action, babes, and relentless killing. Piranha 3D is going to be an epic lake tale, a lake gone to the fishes. bahahahaha! 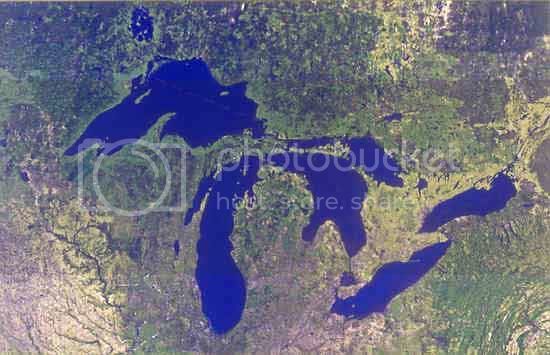 Sadly, all of the great lakes will be contaminated, three of them were already polluted by industrial waste, but now because of BP the last two will be poisoned, no more fresh water for the U.S.
It took only 600 years for humans to ruin North America, just another sign of the END of the WORLD I guess.​

What brand of Crack do you smoke? I think Al Gore sold you tainted stuff.


Today Canada and the U.S.A. have signed agreements to the usage of what clean water is left.

Asian Carp and the highly aggresive Snakehead Fish are among the increasing numbers of invading wildlife.

Environmentalists predict that WATER will be the next natural resource that the world will be fighting each other for within the next decade.​


Starbeast from Planet X said:
Environmentalists predict that WATER will be the next natural resource that the world will be fighting each other for within the next decade.[/B]​
Click to expand...

I can promise you this... not one single war will be fought within the next decade between any halfway developed nation (ie- not African tribe) over water. If we needed to we could get all the water we wanted from the oceans... expensive but costs less then a war and is certainly doable.

I think it's important to separate the term environmentalist from someone who studies or works in the environment.

Alot of what we hear about the problems related with the environment are from people who study it of course the environmentalists take advantage of this and press the global panic button however getting back to the topic which is the great lakes. Sure we may not be able to feel the water related problems directly at the moment but if we continue misstreating our planet and it's resources then we will have problems. That is a fact that cannot be ignored.

BirdOPrey5 said:
I can promise you this... not one single war will be fought within the next decade between any halfway developed nation (ie- not African tribe) over water. If we needed to we could get all the water we wanted from the oceans... expensive but costs less then a war and is certainly doable.
Click to expand...

BirdOPrey5 getting water from the oceans is possible and probably less expensive that waging war but the companies wouldn't be able to make a profit unless you are willing to pay more for water than you pay for petrol apart from that you've got nitrates in the sea water that is hard to get rid of and that causes cancer. In other words getting water from the oceans isn't viable in a capitalistic society, so it is a problem. As for a war being waged over water in the next decade I agree it probably won't happen but what will happen will be social unrest that will lead to bigger problems.

China is currently setting off a plan to build over 100 nuclear power stations. These will be fixed near cities for operation, taking water from the locality. This means whole communities will suffer that existed there. This doesn't mean there will be civil war, but there just might be civil unrest.

Industry has always needed water, that's why they were built near rivers. But other things are running out and that decade timescale may be too short. I've heard talk of nation on nation conflicts within 20-25 years because of dwindling resources for exploding populations and bad decision making on behalf of consumers. The general populous will be so frightened they will lose access to supplies they may very well vote to allow it to happen.