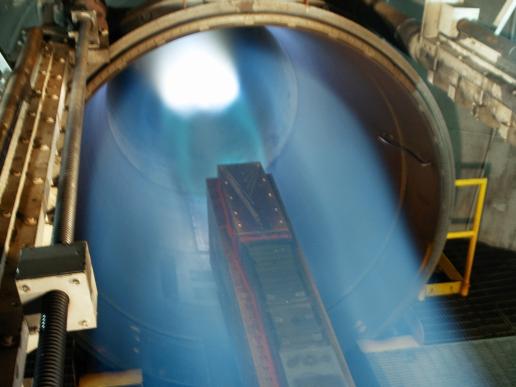 The X-51A successfully made the longest supersonic combustion ramjet-powered hypersonic flight to date off the southern California coast on May 26. It was powered by a SJX61-2 that was first validated in a NASA wind tunnel. The air-breathing scramjet engine, built by Pratt & Whitney Rocketdyne, burned for more than 200 seconds to accelerate the U.S. Air Force's X-51A vehicle to Mach 5, or five times the speed of sound. It broke the previous record for the longest scramjet burn in a flight test, set by NASA's X-43 vehicle. In this image from 2008, the SJX61-2 successfully completed ground tests simulating Mach 5 flight conditions at NASA's Langley Research Center, Hampton, Va. Image Credit: NASA (More at NASA Picture Of The Day)