What is your favorite type of Horror movie and why?
There are so many to choose from.
Plus there are mixes that blur the typeset.

This poll lists some of the most common. If your choice is a mixed type then select the type that you feel has to be there. Your choices are generalized for simplicity. You can always vote to comment and define your own "favorite type"

Since I am a member at a few Horror Movie Communities I am very interested in seeing some comments from a primarly Science Fiction Community's view.

PS: I just started to list the poll choices and there are so many I can't even hope to list them all. 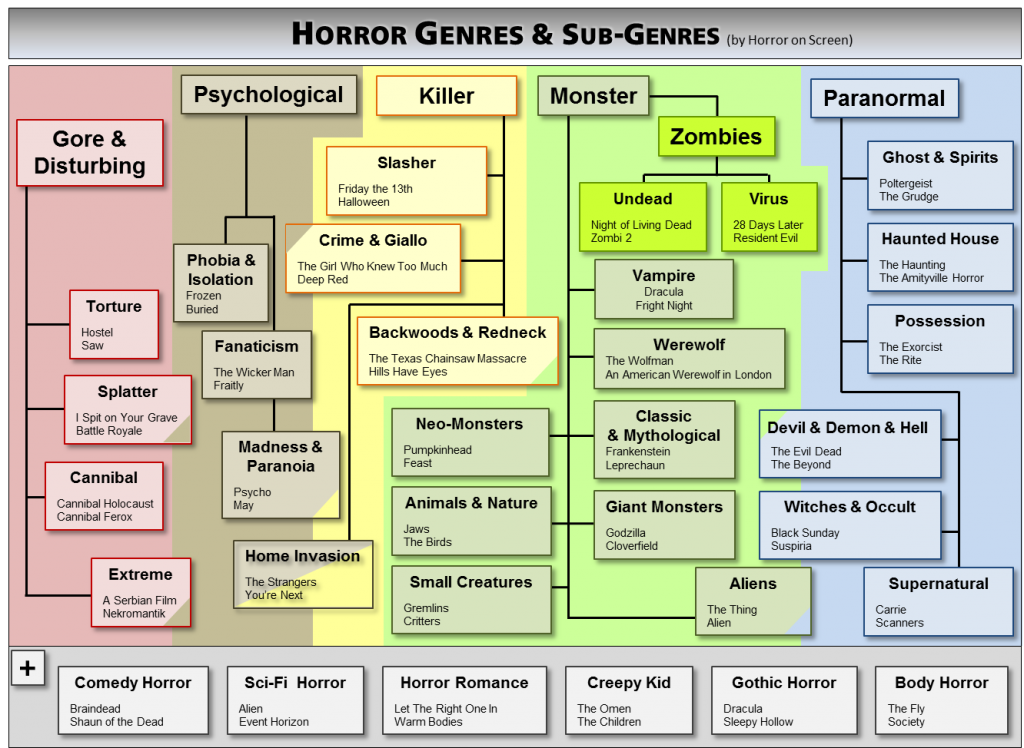 Aliens infuse this subgenre with relentless troublemaking. Overlapping with 'science fiction,' the source of terror is another planet, whose inhabitants are encountered there, or travel to our Earth, if not both.

Creepy Kids horror is defined by its name. Horror mavens have said that children are mysterious strangers coming into the world--and this subgenre takes that unspoken worry and runs with it.

Cross Genre is a subgenre whose horror tales have almost-overriding elements of another major genre.

Cutting Edge refers to horror that consciously goes against the grain, and is probably without many of the genre's familiar tropes and/or styles. These tales usually feature a modern setting.

Dark Fantasy is an overlapping subgenre, and its stories generally feature human evil and strife, rather than supernatural monsters.

Dark Fiction is a huge descriptive category, almost as broad as 'speculative fiction.'

Extreme (splatterpunk, grindhouse or visceral)
This subgenre is as raw as fiction or film can be. The explicit violence and bloody gore are heaped on, often from start to finish.
Splatterpunk is a term coined in imitation of cyberpunk, and favored by certain younger authors. Often these stories incorporate technology.
Viceral is in between these two subgenres, and its stories aim for an "in your face" gross-out.


Fabulist horror is a descriptive category. Its stories often emphasize a 'different' tone or setting, such as an old-fashioned style. Often they have a distinctive locale, such as the Caribbean. Sara

Gothic (English gothic, southern gothic)
'Gothic' was originally synonymous with 'horror,' and in recent decades has come to indicate a certain tone and setting, in this and other major genres. Many of these tales involve an evil from the past, as with haunted mansions and/or encroaching personal insanity.
English and southern gothic tales are set in those locales, and traditionally have distinct styles.
('Gothic' is not to be confused with the trendy 'goth' lifestyle, although that blackness-loving subculture may eventually generate a subgenre of its own.)

Hauntings subgenre tales feature exactly this. Often the persistant ghost is a specific individual, somehow connected to the building or protagonist.

Holocaust tales involve mass deaths, whether during the horrific 20th century event of that name; or involving a similar tragedy, past or future. Those deaths might be due to human slaughter, or from a plague or monsters. In a few bizarre versions, everyone has already died, and today's humanity is the replacement--but doesn't know it.

Humorous horror is fairly common, and its macabre elements are often understated--or exaggerated into parody.

Lovecraftian (Cthulhu mythos, etc.)
These subgenres are rooted in the pioneering fiction of H.P. Lovecraft. The originals and newer works have a distinct style, with florid prose and an overwhelming pessimism. (They overlap with 'science fiction,' as his In the Mountains of Madness was first serialized in that genre's magazine Astounding.)
Cthulhu is perhaps Lovecraft's most famous creation, an eldrich demigod from the deep past.
Tiny subgenres focus on Lovecraft's other varied creations.

Media tie-in (Dark Shadows novels, etc.)
These feature characters made famous by Hollywood, such as Freddy Krueger. They must follow the canon of the originators, and make no permanent changes in the main characters.


Mind Control horror exploits this particular fear. The method may be sorcerous or technological, but the victims are compelled to act against their will and better natures--often while fully aware of what's happening.

Noir horror is a discriptive subgenre. It invokes a gritty urban setting, much like its counterparts in other major genres. Weary, cynical characters populate these tales.

Paranormal is a subgenre with mortal heroes. Such tales emphasize a difficult battle against evil supernatural encroachment, whether by a saintly exorcist or high-tech ghostbusters.

Psychological (surreal)
This subgenre is usually written from a tight viewpoint. Is the protagonist really seeing terrible things, perhaps battling against demonic possession -- or is he (less often, she) going insane? On the flip side, this subgenre can feature an insane protagonist, such as a tormented serial killer.
Surreal horror incorporates bizarre imagery, often drawn from vivid, threatening dreams.

Quiet or Soft horror is, relatively speaking, a mild subgenre. Strong emotion, rather than external violence, is emphasized.

Rampant Animals is a subgenre whose name says it all. Perhaps the dominant examples are Stephen King's novel and film Cujo, which feature an unstoppable rabid dog. Aggressive spiders and chthonic monsters and many other nasty critters.

Rampant Technology exploits the fear that man has dared too much, and created mechanisms that will turn against us.

Satanic Bargains a.k.a. "deal with the devil" stories are common enough to merit their own subgenre. The protagonist, usually an ambitious man, strikes a Faustian bargain with the prince of darkness (or his representative).

Supernatural (demons, zombies, etc.)
These stories focus on various types of monster from 'beyond,' persistantly ruining the lives of a suffering humanity. Often the setting is an isolated village, where the protagonist becomes stranded.
Zombies are popular enough to warrant special mention.


Suspense or Dark Suspense (thriller)
This subgenre is a broad descriptive category. These stories depict few if any supernatural elements, but rather, a continual (usually, unknown and growing) menace.
Horror thrillers add 'action' elements to the story. The hero may run far and fast, but he can't hide.
Share:
Facebook Twitter Reddit Pinterest Tumblr WhatsApp Email Share Link
Top Bottom