The Celestopia Project is a broad-scoped attempt at colonizing the Earth’s oceans one settlement at a time. According to one source, Celestopean Elemental Separators will (apparently) allow them to mine the ocean’s waters for not only “hydrogen and oxygen” but also for “platinum and gold.” Their more moderate homepage suggests they will use Thermal Energy Converters (OTECs) to harvest power from temperature differentials in the ocean. Life on these oceanic colonies will involve age-extending health practices and domed residences that will be resistant to the forces of nature. Each such floating city will be designed to house 5,000 to 10,000 people and these will slowly cover the surfaces of all of the Earth’s oceans. 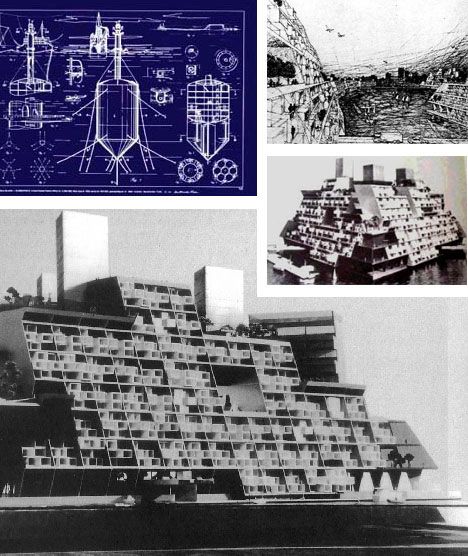 So where did this all start? As with many present utopian ideals and building strategies a surprising number of philosophical ideas, building strategies and ecological approaches embodied in the aforementioned floating utopian concepts date back to the famous environmentalist, scientist, designer, philosopher and visionary Buckminster Fuller. In the 1960s he developed a design for something known as Triton City

which was to be a floating place of residence for up to 5,000 inhabitants and designed to be resistant to tsunamis and other natural forces that floating cities might encounter on the water. Somewhat amazingly, these designs were approved by the Navy as well as the Department of Housing and Urban Development in the United States. In fact, Baltimore even planned at one point to construct one of these and install it in Chesapeake Bay until governments changed and plans fell through. Many thanks to James Lee of SeaStead.org and be sure to check out these awesome boats and ships as well as this compelling prequel to this post for more strange and remote utopian projects: 3 of the World’s Weirdest Micronations.

Staff member
It seems like plans for floating cities come up every 10 years or so but nobody has actually built one. The closest we have now are floating jails in some major US cities but they are permanently docked and are not meant to be living quarters (well, living quarters for non-inmates at least).

Would anybody feel comfortable living in a floating city? Is that why we haven't seen one yet? HHHmm....

NASA: Survival of the Elements