NASA Astronomy Picture Of The Day
Comet and Orion 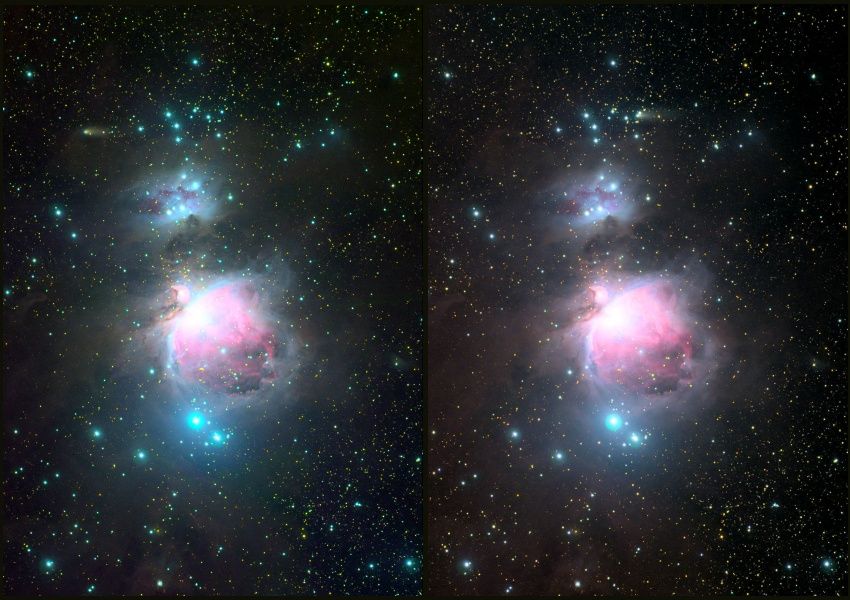 Explanation: These colorful panels both feature a familiar northern hemisphere astronomical sight: the stellar nursery known as the Great Orion Nebula. They also offer an intriguing and unfamiliar detail of the nebula rich skyscape -- a passing comet. Recorded this weekend with a remotely operated telescope in New Mexico, the right hand image was taken on September 26 and the left on September 27. Comet 217P Linear sports an extended greenish tail and lies above the bluish Running Man reflection nebula near the top of both frames. Nearby and moving rapidly through the night sky, the comet's position clearly shifts against the cosmic nebulae and background stars from one night to the next. In fact, the comet was a mere 5 light-minutes away on September 27, compared to 1,500 light-years for the Orion Nebula. Much too faint to be seen with the unaided eye, Comet 217P Linear is a small periodic comet with an orbital period of about 8 years. At its most distant point from the Sun, the comet's orbit is calculated to reach beyond the orbit of Jupiter At its closest point to the Sun, the comet still lies just beyond the orbit of planet Earth.