NASA Astronomy Picture Of The Day
Galaxies of the Perseus Cluster 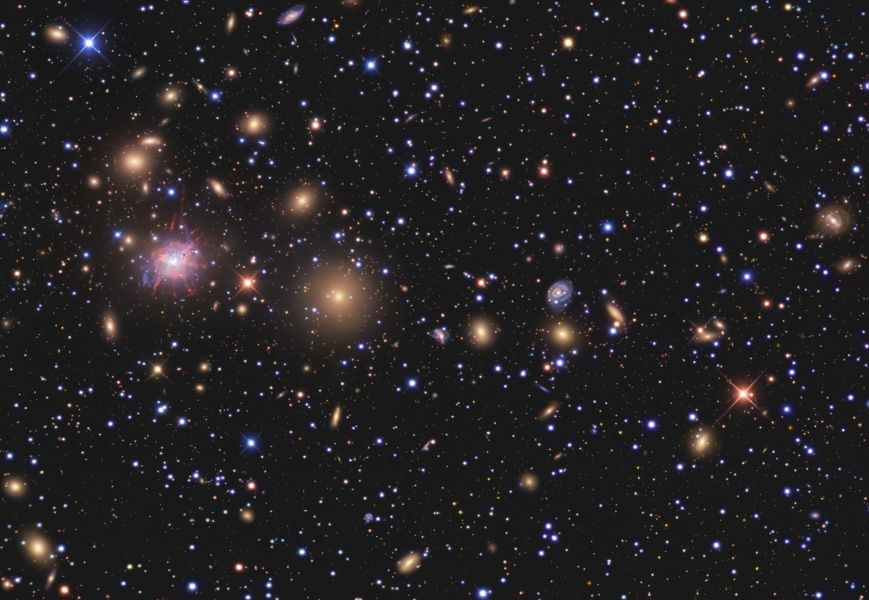 Explanation: This colorful telescopic skyscape is filled with galaxies that lie nearly 250 million light-years away, the galaxies of the Perseus cluster. Their extended and sometimes surprising shapes are seen beyond a veil of foreground stars in our own Milky Way. Ultimately consisting of over a thousand galaxies, the cluster is filled with yellowish elliptical and lenticular galaxies, like those scattered throughout this view of the cluster's central region. Notably, the large galaxy at the left is the massive and bizarre-looking NGC 1275. A prodigious source of high-energy emission, active galaxy NGC 1275 dominates the Perseus cluster, accreting matter as entire galaxies fall into it and feed the supermassive black hole at the galaxy's core. Of course, spiral galaxies also inhabit the Perseus cluster, including the small, face-on spiral NGC 1268, right of picture center. The bluish spot on the outskirts of NGC 1268 is supernova SN 2008fg. At the estimated distance of the Perseus galaxy cluster, this field spans about 1.5 million light-years.