NASA Picture Of The Day
Lagoons of New Caledonia 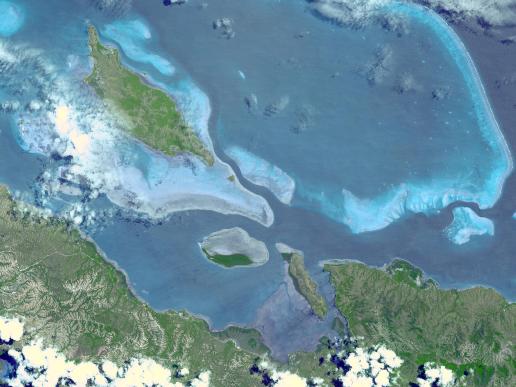 In 2008, UNESCO added the Lagoons of New Caledonia to the World Heritage Site list. The Lagoons comprise six marine clusters that represent the main diversity of coral reefs and associated ecosystems in the French Pacific Ocean archipelago of New Caledonia and one of the three most extensive reef systems in the world. These Lagoons feature a remarkable diversity of coral and fish species and a continuum of habitats from mangroves to seagrasses with the world's most diverse concentration of reef structures. The Lagoons of New Caledonia display intact ecosystems, with healthy populations of large predators, and a great number and diversity of big fish. They provide habitat to a number of emblematic or threatened marine species such as turtles, whales and dugongs whose population here is the third largest in the world With its 14 spectral bands from the visible to the thermal infrared wavelength region and its high spatial resolution of 15 to 90 meters (about 50 to 300 feet), ASTER images Earth to map and monitor the changing surface of our planet. ASTER is one of five Earth-observing instruments launched December 18, 1999, on NASA's Terra satellite. The instrument was built by Japan's Ministry of Economy, Trade and Industry. A joint U.S./Japan science team is responsible for validation and calibration of the instrument and the data products. Image Credit: NASA/GSFC/METI/ERSDAC/JAROS, and U.S./Japan ASTER Science Team (More at NASA Picture Of The Day)
Share:
Facebook Twitter Reddit Pinterest Tumblr WhatsApp Email Share Link
Top Bottom