NASA Picture Of The Day
Mariner 10 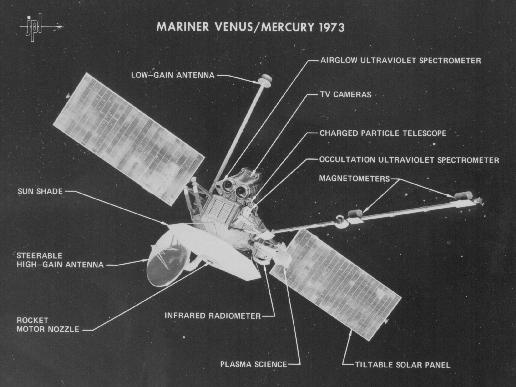 On Nov. 3, 1973, the Mariner Venus/Mercury 1973 spacecraft, also known as Mariner 10, was launched from NASA's Kennedy Space Center, becoming the first spacecraft designed to use gravity assist. Three months after launch it flew by Venus, changed speed and trajectory, then crossed Mercury's orbit in March 1974. This photo identifies the spacecraft's science instruments, which were used to study the atmospheric, surface and physical characteristics of Venus and Mercury. This was the sixth in the series of Mariner spacecraft that explored the inner planets beginning in 1962. Image Credit: NASA/JPL (More at NASA Picture Of The Day)