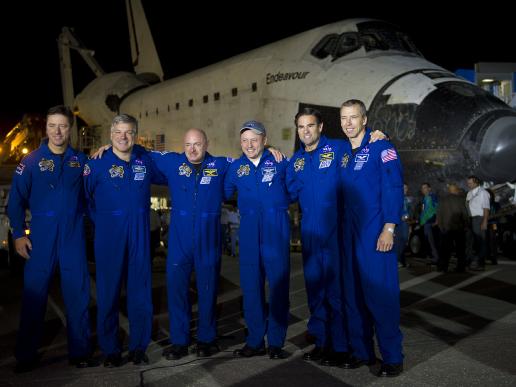 The STS-134 crew pose for a group photograph shortly after landing aboard the space shuttle Endeavour at the Shuttle Landing Facility at Kennedy Space Center, Wednesday, June 1, 2011, in Cape Canaveral, Fla. From left are European Space Agency astronaut Roberto Vittori and NASA astronauts Gregory H. Johnson, pilot; Mark Kelly, commander; Michael Fincke, Greg Chamitoff, and Andrew Feustel all mission specialists. Endeavour completed a 16-day mission to outfit the International Space Station, its final voyage. Endeavout launched on its first mission on May 7, 1992 and spent a total of 299 days in space and traveled more than 122.8 million miles during its 25 flights. Image Credit: NASA/Bill Ingalls (More at NASA Picture Of The Day)