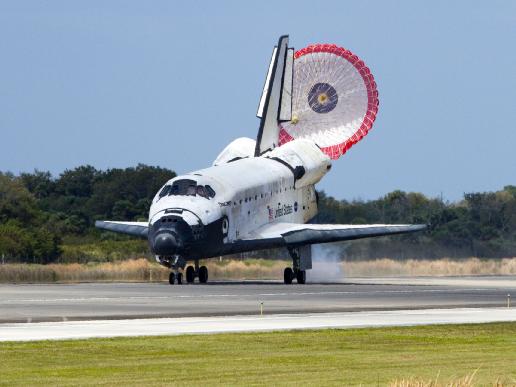 With its drag chute unfurled, space shuttle Discovery rolls down Runway 15 at the Shuttle Landing Facility at NASA's Kennedy Space Center in Florida. Landing was at 11:57 a.m. EST, completing the 13-day STS-133 mission to the International Space Station. Main gear touchdown was at 11:57:17 a.m., followed by nose gear touchdown at 11:57:28, and wheelstop at 11:58:14 a.m. On board were Commander Steve Lindsey, Pilot Eric Boe, and Mission Specialists Nicole Stott, Michael Barratt, Alvin Drew and Steve Bowen. Discovery and its six-member crew delivered the Permanent Multipurpose Module, packed with supplies and critical spare parts, as well as Robonaut 2, the dexterous humanoid astronaut helper, to the orbiting outpost. STS-133 was Discovery's 39th and final mission. This was the 133rd Space Shuttle Program mission and the 35th shuttle voyage to the space station. Image Credit: NASA/Jack Pfaller (More at NASA Picture Of The Day)