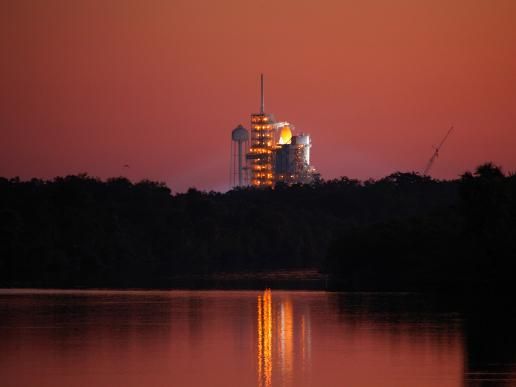 In this image from Friday, Dec. 17, space shuttle Discovery sat on Launch Pad 39A at NASA's Kennedy Space Center in Florida, as its external fuel tank was filled with more than 535,000 gallons of super-cold liquid hydrogen and liquid oxygen during a tanking test. Data from the ship's 89 sensors were evaluated after the tank returned to ambient temperature. This morning, Discovery arrived at the Vehicle Assembly Building, completing the 3.4 mile trek from Launch Pad 39A, known as a rollback, that began at 10:48 p.m. EST on Tuesday, Dec. 21, 2010. There, technicians will take x-ray scans beneath the foam insulation of all 108 support beams, called stringers, on Discovery’s external fuel tank. They’ll also remove sensors on the external tank from last Friday’s tanking test and reapply foam to those areas. Image Credit: NASA/Frank Michaux (More at NASA Picture Of The Day)