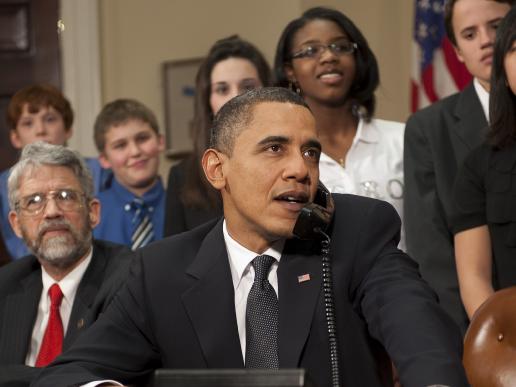 “And so we just wanted to let you know that the amazing work that's being done on the International Space Station not only by our American astronauts but also our colleagues from Japan and Russia is just a testimony to the human ingenuity; a testimony to extraordinary skill and courage that you guys bring to bear; and is also a testimony to why continued space exploration is so important, and is part of the reason why my commitment to NASA is unwavering,” said President Barack Obama during a call to the crew currently aboard the International Space Station. President Obama was accompanied by White House Science Adviser John Holdren, left and middle school students in the Roosevelt Room of the White House during the call on Wednesday, Feb. 17, 2010 in Washington. Image Credit: NASA/Bill Ingalls (More at NASA Picture Of The Day)