Reflections on the 1970s 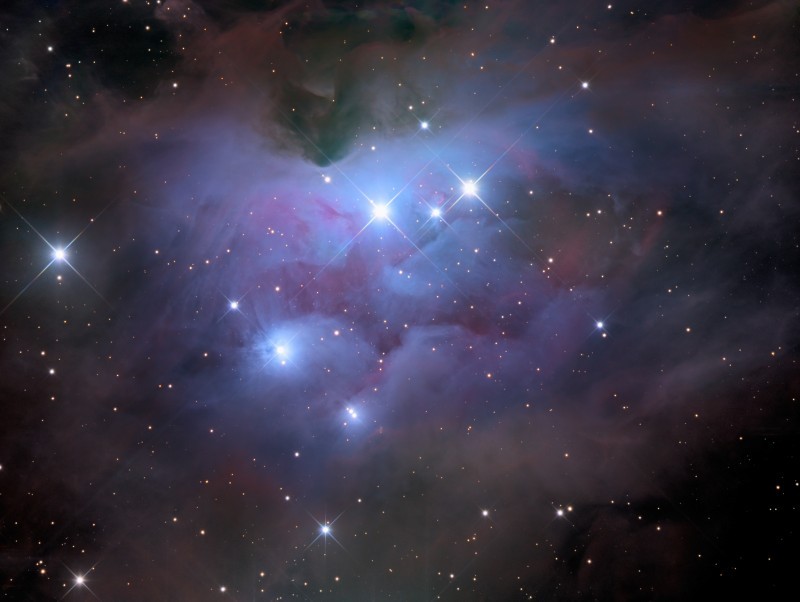 Explanation: The 1970s are sometimes ignored by astronomers. In particular, this beautiful grouping of reflection nebulae in Orion - NGC 1977, NGC 1975, and NGC 1973 - are usually overlooked in favor of the substantial glow from the nearby stellar nursery better known as the Orion Nebula. Found along Orion's sword just north of the bright Orion Nebula complex, these reflection nebulae are also associated with Orion's giant molecular cloud about 1,500 light-years away, but are dominated by the characteristic blue color of interstellar dust reflecting light from hot young stars. North is down in this sharp color telescopic image from New South Wales, Australia, so the more familiar Orion Nebula borders the top of the view. NGC 1977 stretches across the field just above center, separated from NGC 1973 (below left) and NGC 1975 (below right) by darker regions of obscuring dust. Many northern hemisphere observers claim to see the general shape of a running man in the cosmic dust cloud but, of course, they're looking at the view upside down.

Staff member
Seeing pictures like that I often wonder just how much touch-up has been done to the image versus what the original 'raw' image looked like.

Have you taken your meds?

You're right Kevin! They wouldn't have such good resolution and colour back in those times, would they?

Reflections of the Moon