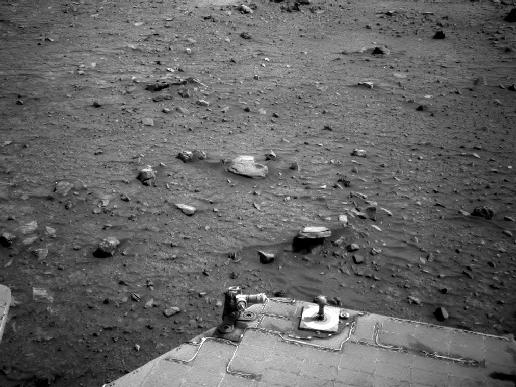 This image of a cluster of rocks labeled 'Rock Garden' is where NASA's Mars Exploration Rover Spirit became embedded in April 2009. The Spirit and Opportunity rovers landed on the Red Planet in January 2004 for what was to be a 90-day mission, but which has lasted 6 Earth years, or 3.2 Mars years. During this time, Spirit has found evidence of a steamy and violent environment on ancient Mars that is quite different from the wet and acidic past documented by Opportunity, which has been operating successfully as it explores halfway around the planet. Spirit used its navigation camera to capture this view of the terrain toward the southeast from the location it reached on the 1,870th Martian day, or sol, on April 7, 2009. Wheels on the western side of the rover broke through the dark, crusty surface into bright, loose, sandy material that was not visible as the rover approached the site. Spirit became stuck in an area near the left of the image's center later in April. Image Credit: NASA/JPL-Caltech (More at NASA Picture Of The Day)