NASA Picture Of The Day
X-38 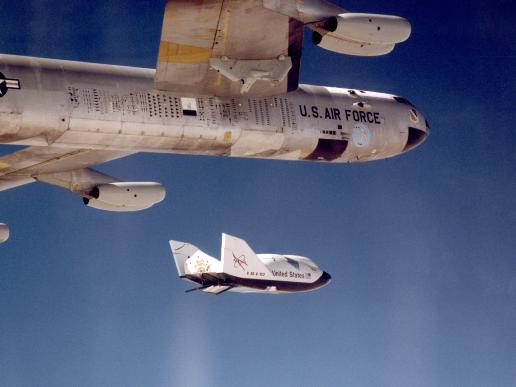 One of NASA's three X-38 Crew Return Vehicle technology demonstrators that flew at NASA's Dryden Flight Research Center at Edwards Air Force Base, Calif., a decade ago has found a new home in America's heartland. In this image from test flights in 1999, the X-38 research vehicle drops away from NASA's B-52 mothership immediately after being released from the B-52's wing pylon. More than 30 years earlier, this same B-52 launched the original lifting-body vehicles flight tested by NASA and the Air Force at what is now called the Dryden Flight Research Center and the Air Force Flight Test Center. The wingless lifting body craft was transferred this past weekend from NASA's Johnson Space Center in Houston to the Strategic Air and Space Museum, located just off Interstate 80 at Ashland, Neb., about 20 miles southeast of Omaha. The X-38 adds to the museum's growing collection of aerospace vehicles and other historical artifacts. The move of the second X-38 built to the museum has a fitting connection, as the X-38 vehicles were air-launched from NASA's famous B-52B 008 mothership. The B-52 bomber served as the backbone of the Air Force's Strategic Air Command during the command's history. Prior to cancellation, the X-38 program was developing the technology for proposed vehicles that could return up to seven International Space Station crewmembers to Earth in case of an emergency. These vehicles would have been carried to the space station in the cargo bay of a space shuttle and attached to station docking ports. If an emergency arose that forced the ISS crew to leave the space station, a Crew Return Vehicle would have undocked and returned them to Earth much like the space shuttle, although the vehicle would have deployed a parafoil for the final descent and landing. Photo Credit: NASA/Carla Thomas (More at NASA Picture Of The Day)