NASA Picture Of The Day
50 Years of Communications in Space 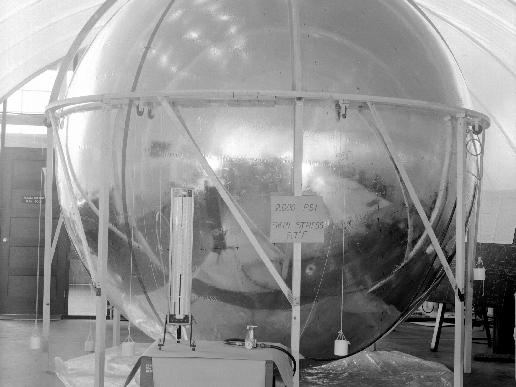 The idea behind a communications satellite is simple: send a signal into space, and send it back down to another spot on the globe. In NASA's early days, engineers discovered the easiest way to accomplish this: bounce signals off a giant metal balloon floating in orbit. The concept was developed into the aptly-named Echo program, and Echo 1A became the first successful launch of the project on Aug. 12, 1960. Echo 1A, now commonly known as just Echo I, was a 100 foot diameter balloon made of mylar polyester. The spacecraft was designed as a passive communications reflector for transcontinental and intercontinental telephone, radio, and television signals. Pictured here is a scale prototype of the Echo satellite undergoing a Skin Stress Test on May 1, 1960. The prototype was 12 feet in diameter, with the size being chosen because that was the ceiling height in the NASA Langley model shop. After an unsuccessful launch attempt for the original Echo I satellite, Echo 1A and the follow-on Echo II were successfully launched. The Echo projects were instrumental in letting the world see that the U.S. was a major force in the space race not very far behind Russia. Among the many contributions of the Echo programs are the first voice communication via satellite which was made by none other than then President Eisenhower and the first coast-to-coast telephone call using a satellite. In addition, the Echo programs resulted in advances in atmospheric density, solar pressure, gossamer structures, solar sailing, and transmitting videos via satellites. The Echo 1A satellite re-entered the atmosphere on May 24, 1968. Image Credit: NASA (More at NASA Picture Of The Day)