NASA Picture Of The Day
A Place in History 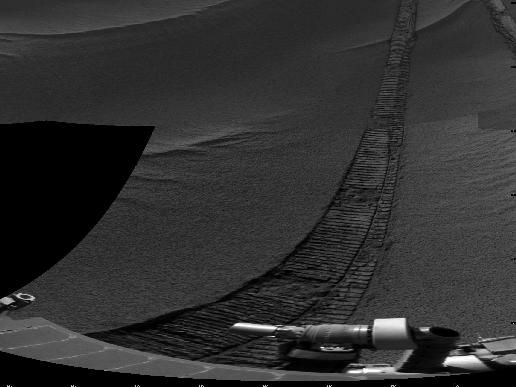 NASA's Mars Exploration Rover Opportunity used its navigation camera to take the images combined into this full 360-degree view of the rover's surroundings after a drive on the 2,220th Martian day, or sol, of its mission (April 22, 2010). Opportunity launched on July 7, 2003, on a mission slated to last 90 days, landing on Mars in January 2004. The rover has exceeded its mission parameters by more than 2,200 days as its exploration of the Red Planet continues. Opportunity took some of the component images for this mosaic on Sol 2220, after the drive, and the rest on Sol 2221. Wind-formed ripples of dark sand make up much of the terrain surrounding this position. Patches of outcrop are visible to the south. For scale, the distance between the parallel wheel tracks is about 1 meter (about 40 inches). Image Credit: NASA/JPL-Caltech (More at NASA Picture Of The Day)

Space Securing a Place for History