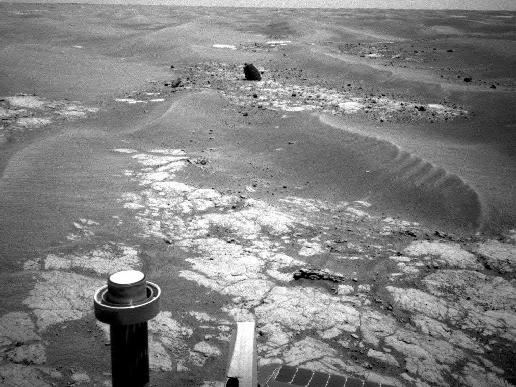 NASA's Mars Exploration Rover Opportunity took this picture of a rock informally named 'Marquette Island' as it approached the rock for investigations that have suggested the rock is a stony meteorite. Opportunity used its navigation camera to record this image during the 2,056th Martian day, or sol, of the rover's mission on Mars (Nov. 5, 2009). The dark-toned rock stood out so prominently in more distant views on earlier sols that the rover team referred to it as 'Sore Thumb' before assigning the Marquette name in accord with an informal naming convention of choosing island names for the isolated rocks that the rover is finding as it crosses a relatively barren plain on its long trek from Victoria Crater toward Endeavour Crater. Image Credit: NASA/JPL-Caltech (More at NASA Picture Of The Day)