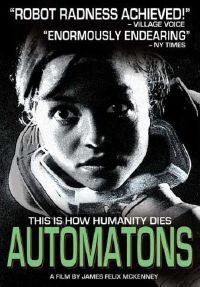 One thing I love about the Glass Eye Pix crew is their use of Angus Scrimm who plays a long-dead scientist and quasi-father to the main character of this story, surrounded by her robots and in constant battle with those jerks across the way. (I won't mention that her acting is terrible, oh wait, I just did) It's still a cool little flick though, sweet robots and don't forget, The Tall Man. Director James Felix McKenney dropped us a line and let us now the whole movie is now available for free online via NY Publuic TV's WNET Reel 13 website, so go enjoy!

A global war has left the surface of the Earth uninhabitable, and the few humans who have lived through the conflict have been driven underground in order to survive. The Girl (Christine Spencer) lives in a subterranean bunker that she shares with several rattletrap robots of her own design. The Girl occupies herself by watching old videotapes of a scientist who was her friend and mentor before the apocalypse, but lately she has other things on her mind. Another survivor (Brenda Cooney) has established a robot army, and is using the machines to lay claim to the remains of the Earth. As the Girl constructs her own mechanical security force, she discovers the Enemy Leader has a dangerous surprise in his arsenal -- the ability to turn the Girl's robot friends against her.

Part of Reel 13’s ongoing mission is to present fascinating independent films you won’t easily find elsewhere. We already launched this initiative with the online debut of Nina Paley’s tremendous achievement, Sita Sings the Blues. Now, the same week that the glossy special effects extravaganza Terminator: Salvation bombards the box office, we bring you a robot flick of another kind…
AUTOMATONS is a low-budget, lovingly-produced film about what happens when communication breaks down between societies. Set in a post-apocalyptic world, the film follows a lone girl and her squad of robots as they struggle to survive the attacks of a relentless enemy.
Featuring veteran genre actor Angus Scrimm, a brilliant sound design, and a “broadcast-from-outer-space” 1950s visual aesthetic, AUTOMATONS is perfect for a movie night or lazy Sunday afternoon.
Directed by: James Felix McKenney
James Felix McKenney is the award-winning writer/director of the horror film Satan Hates You, coming to festivals in 2009. His first feature film was the cult horror-black comedy Cannibalistic!, which garnered rave reviews from leading genre publications including Shock Cinema and Rue Morgue.
He is an associate producer on the ScareFlix films The Roost and Trigger Man. McKenney is responsible for writing and directing the first Scareflick, the quirky supernatural drama The Off Season, which premiered on Lionsgate home video as the #1 debut DVD renter in North America. This was followed up by the critically acclaimed, retro-styled, killer robot film AUTOMATONS, which played festivals around the world as well as extended theatrical runs in New York and Chicago.
McKenney is currently in preproduction on his latest film, Hypothermia, from Glass Eye Pix and MPI/Dark Sky Films.
Click to expand...