"Well, Chucky was trying to take over my soul." - Andy Barclay

It's been two years since Andy Barclay had a play date with the homicidal boy toy Chucky and he hasn't been exactly kicking goals in the interim. Mom is consigned to a mental institution, the Police are denying any knowledge of plastic mayhem, and Andy is in the system. But his luck just might be changing as Joanne and Phil Simpson are prepared to take him into their home where he will meet the indomitable teen chick Kyle. Unfortunately for Andy the evil Good Guy corporation have recovered the remains of Chucky and are going Frankenstein on his arse, rebuilding by hand the Good Guy toy because evil Corporation. Naturally when dealing with voodoo infused maniac toys things don't go to plan and there's a death involved.

Chucky, taking time out of his normal occupation of going on a homicidal rampage, is off to find Andy and do the soul transfer thing. Naturally this is going to involve a lot of deaths, no one believing Andy's paranoia about Good Guy Dolls, and Kyle going Ripley on Chucky's arse. Charles Lee Ray just might have meet his match in the Andy/Kyle tag team duo, but heck he's going to give it the old college try and bad luck to any random who gets in his way.

Guess with all the positive fan reaction to the first movie we were always going to get a sequel, but as usual the question was is the sequel a cash in or an attempt to further the themes and ideas of the original movie. Themes here used loosely, there is zero in the way of exploring the human condition in this franchise, and hey folks this isn't why we slip a Child's Play movie on in the first place. We're all here to see Chucky do his thing, with as much mayhem as possible thrown onto the screen. I'm just going to alienate everyone right here right now, for mine Child's Play 2 takes the ideas from the first movie, wrenches them up to a new level, and overall delivers a better experience for Good Guy fans everywhere. Don Mancini is back on script writing duties, knows what the franchise is about, and goes pedal to the metal on the whole notion.

Gorehounds are going to be howling at the moon over CP2, we're talking a lot of fairly vicious action and a fair amount of body damage, and to be truthful Chucky himself gets the worse of it, you simply can't keep a good psycho down, Chucky proves near indestructible as he just keeps on coming like a demonic Energizer Bunny. Equally there's what the kids call inventive kills going down as Chucky cuts a swath through the supporting cast in some surprisingly unique culling the herd moments. For slasher fans brought up on a diet of high body counts and "gnarly deaths" dial right in, Chucky might be diminutive but he makes up for it in style y'all.

On the bright side the mythology is being kept alive in movie 2 without the need for embellishments that destroy previous truths from the first movie. Charles Lee Ray still needs to move his soul from the Good Guy doll to Andy, as the little dude was the first person Ray revealed his true identity to. Our plastic fantastic is on the clock here as if he doesn't work the voodoo hoodoo within a set timeframe he'll be stuck in the doll. Holy Damballa he better get his plastic bum into action right quick, keep that in mind as the movie minutes start clocking up to the hour mark. Just a thought, and very minor quibble, wouldn't Chucky need the Heart of Damballa to do the transfer thing? Hey we're talking franchise rules, sticklers for keeping it all within the lines over here. If anyone else has an update on this requirement let me know.

Director John Lafia picks up the reigns from Tom Holland, big shoes to fill, and runs with the notion of rocking the pace, besides a couple of character introduction scenes, things are ramped up here. The action is coming at you fast with little in the way of lagging, everything aimed at getting us to the final confrontation at the Good Guy doll factory; do they actually produce anything other than Good Guy dolls? While we could quibble about the film angles and lack of awesome magic behind the camera we are end of day watching a movie about a killer doll, what were you expecting David Lynch on steroids! Lafia dials up exactly what we need for the action erupting on our screens, I wasn't missing a thing, Lafia has his lighting right on, has the scenes constructed like he brought them at Kmart - and hey not the cheap knock off ones from Taiwan, and generally brings the viewer into the action without having us slap our foreheads. I couldn't have been happier, even without zombies or Ninjas.

Surprisingly the acting is pretty good in this one, though I was hoping for some over the top ham, hey you can't always get what you want else I would be knee deep in Playboy bunnies wanting some consoling over Hugh passing on. Alex Vincent (Andy) is back, actually the Child's Play movies are probably his most well-known roles, and keeps up the slightly retarded performance he is known and loved for. Everyone else gets a passing mark, with Brad Dourif at his rousing best with malice dripping one liners and a villain we all just love to hate.

Before I finish off just thought I would mention the score by Graeme Revell which had me giggling like a college girl over the new hot dude in school. Revell goes with Universal classic horror stylings, which some might call overly dramatic, I kind of dug the whole rousing nature of things. So if after a movie that goes classical with the soundscape then you are in the right place.

Sorry almost forgot to mention the horror elements, which is probably why most of you are spending times watching a psycho Barbie outing. Chucky is at his best taking down anyone unlucky enough to step between him and his plans for Andy. The death toll is constantly on the rise as Chucky simply does what Chucky does best, take down people in unique fashion with as much gore as he can muster. Please note this is 1980s style gore and not the all-out viscera of more modern outings. So hang onto your linen this isn't a pleasure cruise and sure as hell Chucky isn't your cruise Director.

Child's Play 2 had me rocking to Chucky's beat, the plastic fantastic's second outing if anything is surprisingly superior to the original! Yeah big call I know but the franchise has its groove on and knows exactly what it is trying to do, Chucky being psycho, Andy fighting for his soul, and a rising body count, that's about all the background you need to get your Child's Play on. While the first movie was finding its feet, and clearly was intended as a standalone, the second says to hell with that, let's up the ante and try to get a franchise rocking. Plus you get a kickass chick in Kyle, prepared to put it on the line. I got some genuine tension filled moments and was across the 1980s vibe and atmosphere the movie has going down. If you can get beyond the basic premise then you are going to have a good play date with this movie, unleash your inner psychopathic child.

Childs play the return of Chucky had a matured gal from Logans Run in it if I recall.... 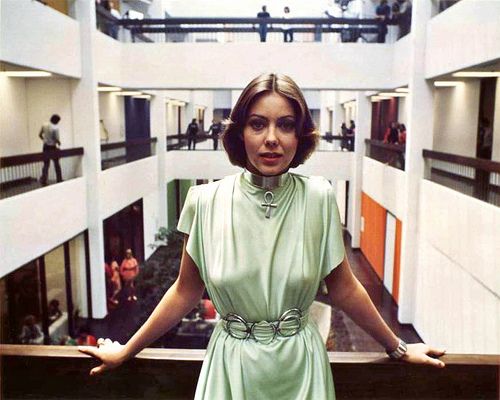 She looked good back in the day, love that short n sassy hair of the 70s'!