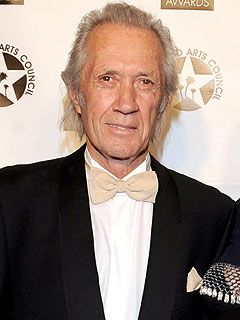 Movie and TV actor David Carradine, best known for his leading role of Kwai Chang Caine on TV's Kung Fu in the 1970s, died Wednesday in Bangkok, where he was shooting a film, his manager confirmed Thursday. The star was 72.

According to manager Chuck Binder, the movie's producer found Carradine dead in his hotel room. Binder told Fox News the death is "shocking and sad. He was full of life, always wanting to work ... a great person." Citing Thai police sources, the BBC reports that a hotel maid discovered the American actor in a closet with a rope around his neck and body.

Married five times and divorced four – he is survived by his widow, Annie Bierman, whom he married in 2004 – Carradine starred as folk singer Woody Guthrie in the 1976 Best Picture Oscar nominee Bound for Glory. Among his later screen roles was in Quentin Tarantino's Kill Bill, in which he played Bill.

Staff member
Some disturbing reports are coming out about the manner in which he died.