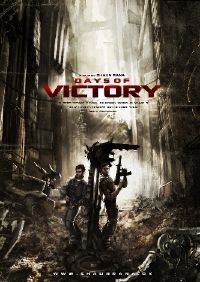 Barry B. Longyear's Hugo award winning novella, "Enemy Mine" is a science fiction masterwork about the human propensity to succumb to xenophobia. In the book, a human and an alien soldier, whose races are in a state of war, are marooned together in space and have to come to grips with their blind hatred towards each other in order to survive a hostile environment that is foreign to them both. The eventual film adaptation by Wolfgang Petersen is actually pretty decent and if you're at all a fan of 80s scifi and haven't seen it you really should.

Director Shaun Rana has a film in early development called Days of Victory which, while still scifi, brings the metaphor back down to earth, so to speak. Taking place in a post-apocalyptic future world barely standing after decades of wars between Muslims and the rest of the world, two soldiers blinded by hate meet on the battlefield only to end up having to rely on each other for survival.

Synopsis:
In 2011, WWIII broke out between the UN and the Muslim world. The world split in two leading to large scale emigration. The New World Order (NOW) was formed and fascism spread across the world. 90% of nature was destroyed.

In 2152, tension escalated and WW IV broke out. The NOW dispatched “artificial intelligence” troops to wage war against the Muslim community. The war lasted several years with much bombing and destruction. Even so, the Muslim world became a big nation. NOW united the neutral countries to expand their allies and prepare for total elimination of the Muslim world.

The Year is now 2200. WW V has begun and the world has become a post-apocalyptic society with Muslims on one side and the rest of the world on the other – both sides united in hatred towards one another.

The story revolves around two fighter pilots from each side of the world. They meet during an air attack where they are forced to fly into the desolated area where no one has lived for decades. After an intensive air strike, both planes are damaged and forced to land and continue the fight on land. Soon the two pilots realize what the war has done to the world: inanimate nature, tornados rage past them, tons of garbage lines the desolate streets and war materials fly by them. After fighting for days they lose communication and realize that despite their differences they need each other to survive. With the climate as their enemy, they are 2000 miles from freedom: left without food or transportation. As they struggle to survive, a friendship grows between them.

As stated above the film is only in the development stage and looking for funding, but I think Rana has taken a classic cold-war era story and made it work in a way that's relevant to today's global political climate. Plus, the concept art is hella cool. Keep you posted!

Horror Suspiria (1977)
Tagline: The only thing more terrifying than the last 12 minutes of this film are the first 80.
Genre: Horror
Director: Dario Argento
Release: 1977-02-01