Faster than a speeding bullet - going for the land speed record

There's an extremely well made animated video on the BBC page that demonstrates in laymans terms just how fast RAF pilot Andy Green is going to drive his jet powered car.

An animation of how the record attempt might look

The British team that claimed the land speed record in 1997, taking a car through the sound barrier for the first time, is planning to go even faster.
RAF pilot Andy Green made history in 1997 when he drove the Thrust SSC jet-powered vehicle at 763mph (1,228km/h).
Now he intends to get behind the wheel of a car that is capable of reaching 1,000mph (1,610km/h).
Known as Bloodhound, the new car will be powered by a rocket bolted to a Typhoon-Eurofighter jet engine.
The team-members have been working on the concept for the past 18 months and expect to be ready to make their new record attempt in 2011.
Bloodhound project leader Richard Noble told BBC News: "This is one of the most exciting things you can do on God's Earth; and when you've the opportunity to do it really, really well, with the latest technology, you can't resist the challenge."

The initial studies have illustrated just how grand a challenge it will be.
The 12.8m-long, 6.4-tonne Bloodhound SSC (Super Sonic Car) will be expected to travel faster than a bullet fired from a handgun.
Its 900mm-diameter wheels will spin so fast they will have to be made from a high-grade titanium to prevent them from flying apart.
The car will accelerate from 0-1,050mph (1,690km/h) in just 40 seconds; and at its maximum velocity, the pressure of air bearing down on its carbon fibre and titanium bodywork will exceed 12 tonnes per square metre.

"This is a big engineering adventure," commented Bloodhound's technical chief, John Piper.
"We've not seen anything yet which we can't overcome given the opportunity and the time. We don't have all the answers yet, but we have quite a few of them, and I'm sure other solutions will present themselves." 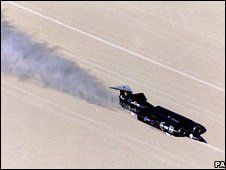 Thrust SSC broke the sound barrier when it claimed the record

Wing Commander Green acknowledges there will be risks involved but says the car will be designed to maximise his safety.
"Does that make it zero-risk? No. Is life with zero-risk interesting? No.
"This is worth making a risk for because it's a huge challenge and a huge prize at the end, not just for the biggest record but to inspire the next generation of engineers, to share it with every schoolchild in the country," he said.
Inspiration is a key driver for the project. The genesis of the idea came from Lord Paul Drayson, the UK's new science minister who also happens to be a racing driver.
He approached Noble and Green when he held a post in the Ministry of Defence to ask them if they could do something that would grab the attention of schoolchildren and turn them to careers in science and technology.
"The consequences if we don't inspire the next generation are that we will wither as a country," Lord Drayson told BBC News.

"Over the centuries, we've been involved in some of the most important scientific discoveries. The Brits are good at science. We have got to make sure the next generation gets the vision, and has the opportunity to maintain that tradition."
As a consequence, a schools programme will be built around the project that aims to involve young people at every stage in the designing and building of the car.
The team's HQ in Filton, Bristol - the "home of Concorde" - will have a schools visitor centre featuring the "classroom of the future".
Richard Noble added: "Our industries are starved of engineers. There are real problems on the education front; and, of course, what we've got now is the environmental challenge coming up.
"There are a vast number of new products that are needed, and Britain simply isn't going to play unless we have the engineers."

Lord Drayson's role has also ensured one key element of Bloodhound has been made available to the project team: the EJ200 jet engine.
The Ministry of Defence is lending the team engines that were used in the flight development programme for the Typhoon. These test engines are beyond combat use but have more than sufficient working time left in them to power Bloodhound.
The EJ200 will produce about 20,000 lbs of thrust (90 kilonewtons) and will sit underneath a hybrid rocket engine that produces about 25,000 lbs of thrust (110kN)
The rocket will provide most of the power to get Bloodhound close to the speed of sound (Mach 1); the Typhoon engine will enable Andy Green to throttle up to the target speed of 1,000mph (Mach 1.4).

The rocket engine will be on or off; the EJ200 can be throttled up and down


Apart from the not-insubstantial in-kind support of the MoD in the loan of the EJ200s, Bloodhound is a private project that will need to raise some £10m in financing.
Parallel to the design effort, a location for the record attempt is being sought. Thrust SSC broke the sound barrier in the Black Rock desert in Nevada, US.
It is known that a number of other teams are also planning an assault on Thrust SSC's mark.
"There are three cars out there right now with varying degrees of credibility and at various stages of advancement," said Andy Green.
"The competition for what we're doing is a very important part of it."
The initial design office for Bloodhound is based at the University of the West of England, where a full-scale mock-up of the supersonic car will be built shortly. Swansea University is also a key early sponsor of the project, assisting in aerodynamics research.
Jonathan.Amos-INTERNET@bbc.co.uk
Click to expand...

A
Need for Speed Underground