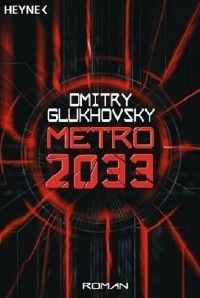 For some reason we missed this getting announced last year but Dmitry Glukhovskii's enormously popular Russian PA novel, "Metro 2033," not only received an English translation this year but has been on its way to a PC game console near you for quite some time. Gearing for release from Kiev based game group, GSC Game World (the guys who did S.T.A.L.K.E.R) in Fall 2009, Metro 2033 the game actually looks pretty cool. We'll have to get our own game expert Anglebender on this one.

Synopsis:
The year is 2033. The world has been reduced to rubble. Humanity is nearly extinct. The half-destroyed cities have become uninhabitable through radiation. Beyond their boundaries, they say, lie endless burned-out deserts and the remains of splintered forests. Survivors still remember the past greatness of humankind. But the last remains of civilization have already become a distant memory, the stuff of myth and legend.

More than 20 years have passed since the last plane took off from the earth. Rusted railways lead into emptiness. The ether is void and the airwaves echo to a soulless howling where previously the frequencies were full of news from Tokyo, New York, Buenos Aires. Man has handed over stewardship of the earth to new life-forms. Mutated by radiation, they are better adapted to the new world. Man's time is over. A few score thousand survivors live on, not knowing whether they are the only ones left on earth. They live in the Moscow Metro.

But that's not all folks. We also discovered an amazing website for the next book in the Metro series called, you guessed it, "Metro 2034". If anything stands as a testament to the popularity of the novel it's this site which features amazing artwork and what appears to be a whole slew of upcoming multi-media avenues. Could there be a game sequel as well?
Click to expand...

Trailer also embedded at the source