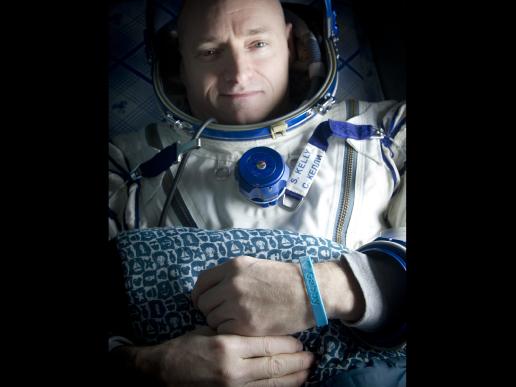 Expedition 26 Commander Scott Kelly wears a blue wrist band that has a peace symbol, a heart and the word 'Gabby' to show his support for his sister-in-law U.S. Rep. Gabrielle Giffords, as he rested onboard a Russian Search and Rescue helicopter shortly after he and fellow crew members Oleg Skripochka and Alexander Kaleri landed in their Soyuz TMA-01M capsule near the town of Arkalyk, Kazakhstan, on Wednesday, March 16, 2011. NASA Astronaut Kelly, Russian Cosmonauts Skripochka and Kaleri are returning from almost six months onboard the International Space Station where they served as members of the Expedition 25 and 26 crews. Image Credit: NASA/Bill Ingalls (More at NASA Picture Of The Day)