Philip K. Dick's paranoid novels have spawned a ton of action movies, from Blade Runner to Paycheck, but they've only recently started to be seen as fodder for art films like Scanner Darkly. And now one of Dick's weirdest books, Ubik, has just been optioned by Celluloid Dreams, a European company better known for producing or distributing movies like Son Of Rambow, Persepolis and I'm Not There. Dick's daughter, Isa Dick-Hackett, will co-produce the movie and says that Celluloid Dreams' vision is close to her own.

Ubik takes place in an alternate 1992, where you can travel to the moon, and telepathy is real. A company run by a man named Glen Runciter can block telepathy for clients who don't want their minds read. His adversary is Ray Hollis, who runs an organization of psychics. Our protagonist, Joe Chip, is a technician with Runciter's company and is crushed out on Pat Conley, one of the psychic-blocking people. They all head to the moon on behalf of a client who wants his mind shielded, but then everything goes to hell and Chip finds himself stuck in a disorienting world where everything is falling apart and he seems to be drifting back to a werid version of 1939.
Ubik was named one of the best 100 novels since 1923, by Time Magazine.[Variety, via Cinematical] 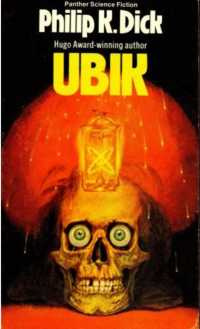 THEY SAY
Planned movie based on the novel of the same name by sci-fi author Philip K. Dick.
Described as “a metaphysical comic nightmare on death and salvation,” Dick’s 1969 novel Ubik was heralded as one of the 100 greatest English-language novels by Time magazine

.
As of May 2008 the film has been optioned by Celluloid Dreams. The film will be produced by Hengameh Panahi of Celluloid Dreams and Isa Dick Hackett, the author's daughter, of Electric Shepherd Productions. It is slated to go into production in early 2009. It is unclear at this stage who will star in it or direct it.
The novel takes place in the then “future” of 1992. Civilians can go to the Moon and psi phenomena are widely accepted as real. The protagonist is Joe Chip, a debt-ridden technician for Glen Runciter's “prudence organization,” which employs people with the ability to block certain psychic powers (as in the case of an anti-telepath, who can prevent a telepath from reading a client's mind) to enforce privacy by request. Runciter runs the company with the assistance of his deceased wife Ella, who is kept in a state of “half-life”, a form of cryonic suspension that gives the deceased person limited consciousness and communication ability.

[/FONT] WE SAY
Always viewed as “most likely to be filmed” by Dick himself, the author actually wrote a screenplay based on his book in 1974 for French filmmaker Jean-Pierre Gorin. Dick wrote the screenplay within a month, but Gorin never filmed the project. The screenplay was published in 1985 (three years after Dick’s death) as Ubik: The Screenplay.
Ironically many of Dick’s other literary properties were turned into movies such as Blade Runner, Total Recall and A Scanner Darkly.
Will Hollywood use author Philip K. Dick’s original screenplay? Maybe they will now that his daughter is involved in the project.
Ironically few of the movies based on Dick’s material can be truly described as truly Dickian or true to the author’s original vision with the possible exception of the recent A Scanner Darkly (starring Keanu Reeves). Usually Dick’s ideas merely serve as one-sentence plot lines for Hollywood film-makers.
Our favorite scene from the book involves the penniless hero attacking a robot apartment door that insists on a five-cent toll: