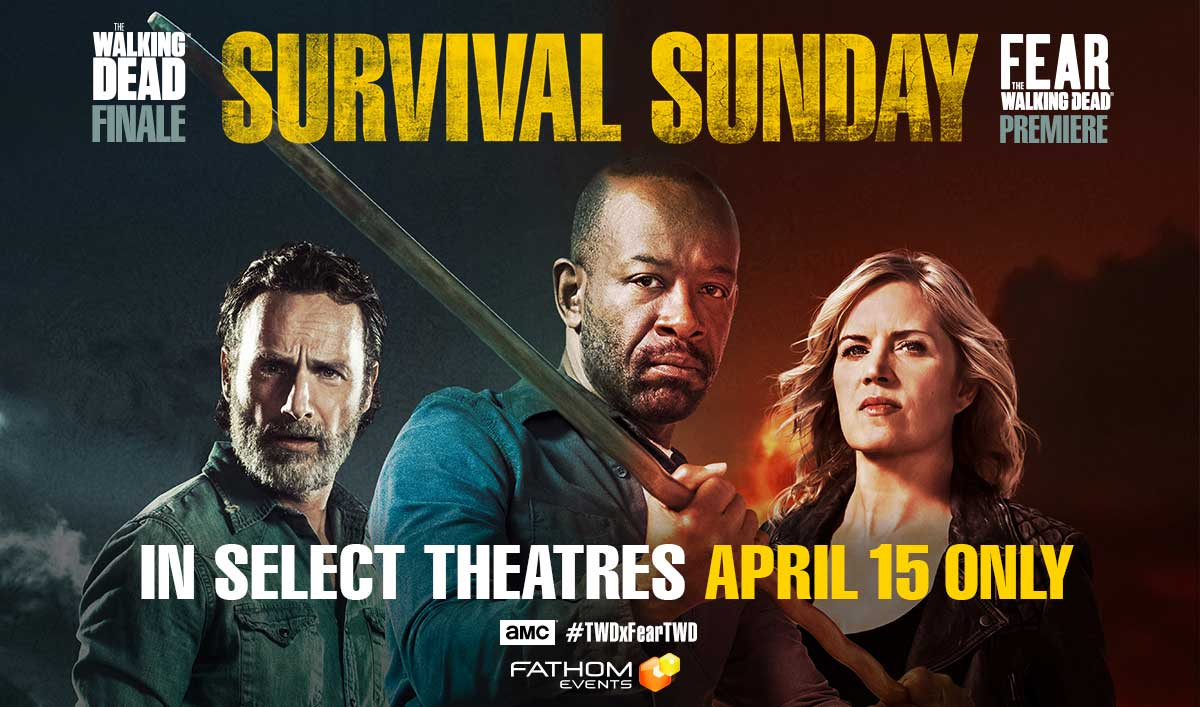 Fans of The Walking Dead universe can now experience their favorite post-apocalyptic world on the big screen as Fathom Events and AMC announced today “Survival Sunday: The Walking Dead & Fear the Walking Dead,” a one-night screening event on Sunday, April 15.

The exclusive event, celebrating the highly anticipated character crossover will feature the final episode of The Walking Dead Season 8 and the Season 4 Premiere of Fear the Walking Dead in more than 750 select movie theaters nationwide.

Members of the TWD Fan Rewards Club can purchase their tickets starting Thursday, March 15 at www.TWDRewards.com and earn points for their fandom.

Tickets for “Survival Sunday: The Walking Dead & Fear the Walking Dead” can be purchased beginning Friday, March 16 at www.FathomEvents.com and at participating theater box offices.

Tickets for “Survival Sunday: The Walking Dead & Fear the Walking Dead” can be purchased beginning Friday, March 16 at www.FathomEvents.com/events/survival-sunday or participating theater box offices. Members of TWD Fan Rewards Club can purchase their tickets starting Thursday, March 15 at www.TWDRewards.com and earn points for their fandom.

“Sunday, April 15 marks an epic and highly-anticipated moment for these series, as worlds collide when Morgan crosses over from ‘The Walking Dead’ and into the new world of ‘Fear,’” said Theresa Beyer, SVP of Brand Activation for AMC. “We are thrilled to be working with our terrific partners at Fathom to provide fans from across the country the opportunity to experience this crossover moment in such a special way and among other members of one of television’s most passionate fan communities.”

“‘The Walking Dead’ and ‘Fear the Walking Dead’ have captivated audiences and kept them on the edge of their seats for many years,” Fathom Events CEO Ray Nutt said. “Self-proclaimed ‘Dead-heads’ will have the unique opportunity to come together to experience these two compelling dramas larger-than-life and commercial-free on the big screen for just one night this April.”

Staff member
Wish I lived in the States, you guys get some cool stuff going down

Sorry slight sidetrack, who else thought season 3 of FTWD was the best season thus far?

Saw this crossover, I liked it because I like Morgan, he is a favorite, hadn't watched FTWD all the time, now with Morgan and the first episode being so good imo I'm sticking with it.