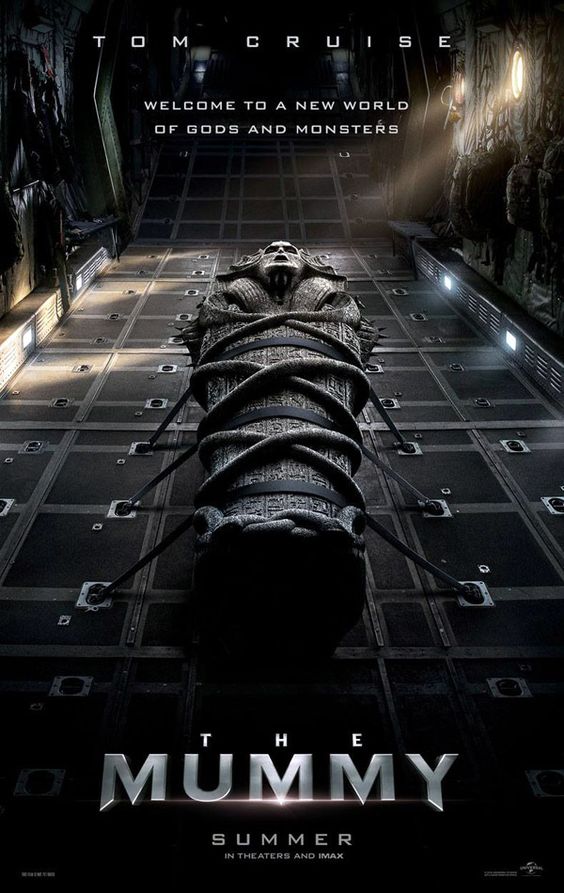 
Thought safely entombed in a tomb deep beneath the unforgiving desert, an ancient princess (Sofia Boutella of Kingsman: The Secret Service and Star Trek Beyond) whose destiny was unjustly taken from her is awakened in our current day, bringing with her malevolence grown over millennia and terrors that defy human comprehension.
From the sweeping sands of the Middle East through hidden labyrinths under modern-day London, The Mummy brings a surprising intensity and balance of wonder and thrills in an imaginative new take that ushers in a new world of gods and monsters.


Another Reboot by Universal. Do we really need another Mummy movie? Tom Cruise has been getting some pretty decent roles lately and seems to be doing a bit better at the job. I'll certainly watch this but I am kinda fond of the Brandon Fraiser one.

This one had so much potential to set up the "Dark Universe" movie universe that Universal envisioned, shame to see what the finished product came to be. I think the casting of Tom Cruise was a bad choice for this role, plus it seems that writers didn't know exactly what the tone of the movie was to be.

In some of the early scenes Cruise tries to do the character as a light-hearted adventurer who stumbles unto something bigger then he could've imagined, much in the same way Brendan Fraser played his character in his Mummy franchise movies. At other times though Cruise plays the character as a well-seasoned fighter and some scenes he bumbles through both. For example, in an early scene Cruise's character easily takes a gun out of the hand of a soldier who is pointing it at him, something you might expect to see in Cruise's Mission: Impossible or Jack Reacher movies, but then he immediately acts as though he has no idea how to properly hold a gun or fire it. Then, oddly, around the middle of the movie it seems like the writers must've thought that the attempts at humor weren't working so they ditched them. The one thing consistent though is that Cruise portrays nearly no emotion regardless of what is going on around him.

The premise of the movie, though, is sound. The Prodigium organization is an international group dedicated to identifying, hunting down, and containing all forms of evil. The London branch is headed by none other than Dr. Henry Jeykll of Jeykll & Hide fame. Portrayed by Russell Crowe, who outshines Cruise, Jeykll is ruthless in his job and will do anything necessary to stop evil as he sees it. In a scene showing a lab of the Prodigium London headquarters we see glimpses of vampire skulls and an arm that looks like it came from the Creature from the Black Lagoon, both serve as teasers of the classic monsters that might have shown up in future movies.

With Prodigium being the recurring element it would be easy to envision a series of movies that could have rivaled the current Marvel movie franchise. Johnny Depp was to have played the Invisible Man and Javier Bardem as Frankenstein's monster. The Bride of Frankenstein was to be the title of the next movie in the Dark Universe. At the moment Universal still says they are committed to the Dark Universe but everything is either on hold or pushed back. The other slated movies, The Creature from the Black Lagoon, The Invisible Man, Van Helsing, and Wolfman are now all on hiatus. Bride is still being worked on but the directors, after the poor performance of The Mummy, have stated that it'll be a stand-alone movie with no connection to anything else.

Having seen many bad movies this one isn't bad, it just isn't outstanding like the bumper of a film series should be. I hated Tom Cruise movies. Lots of people I know do too. Just the fact that it is Tom Cruise you're looking at stigmatizes the film. People got 'used' to Brendan Fraser as a Mummy fighter. People got 'used' to Arnold Vosloo as the Mummy. If those actors were exchanged and it was another Brendan Fraser film, people would have flocked to it.

I've watched the movie four times. The actors do a fine job for what it is. Tom Cruise, despite his popularity rating is able to act. I believe the change in scope and star had a lot to do with the films success rating. Even at the 4th watch, my mind still rebukes Tom Cruise as Brendan Fraser and a Mummy that is not Arnold Vosloo.
The story itself has issues. However, those issues are not as damning as some very well-accepted high grossing films of late. I think the main issue is the fact that Universal Dark Universe is attempting to Reboot the Mummy story instead of building on the past success of the namesake. People have a mindset of a Mummy movie.

Basically, its a copy job. They are trying to copy Legendary's Monsterverse as a theme. Prodigium instead of Monarch. I am looking now for the Monarch logo in future viewings. I can almost anticipate some type of connection to be hinted at because the premise is so nearly identical.

Its lazy creativity to attempt to cash in on the concept of Monsterverse. Universal's Dark Universe shouldn't need gimmicks to sell their movies. They have been long established. A reboot series doesn't need to change the formula to sell, all they need to do is create a movie that is exceptional using baseline established formulas that already exist in Universal's arsenal. Legendary's Monsterverse has never existed, that is why it will work. Universal's classic monsters has existed with multiple cross films that has successfully brought Frankenstein, The Wolfman and Dracula together on screen many times. Legendary's Monsterverse initial film gave us a new threat right from the get go with the MUTOs. They didn't change Godzilla's nature drastically, they used fandom to carry the film. Godzilla was "Wow, Cool" while the Mummy was "WTF?"
I think they were going for "Wow, Cool" but they were wrong about the audience's perception of this classic monster. Someone didn't do their fandom homework while they were penning the story. As it is, in my mind, The Mummy cheapens the Mummy franchise. It minimizes the Dr Jekyll and Mr Hyde franchise and twists fandom to left field.

As much as I want a Universal: Dark Universe film series, If this is the standard to expect, its going to be a serious disappointment. My favorite is The Creature From The Black Lagoon. If they use the same lazy creativity, they will ruin it for me.

Tom Cruise destroys another movie franchise, seriously the Dark Universe was a half hearted idea at best, seriously Bride of Frankenstein !?! While I dug the original, no wasn't around when they made it Kev