"Trapped in the Tower of the Brain Thieves"

Ten desktop wallpapers from "Trapped in the Tower of the Brain Thieves" in several popular resolutions - if yours isn't listed, just pick the next smallest one and set it to "Center" (not "Stretch"!) when you choose it for your backdrop.

Right click the link you want and save it to your own computer. 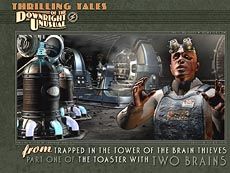 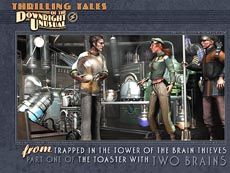 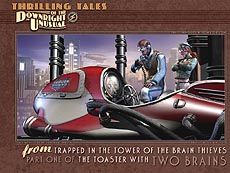 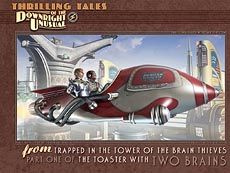 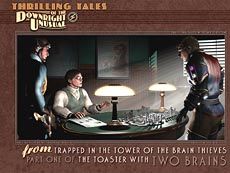 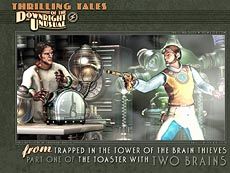 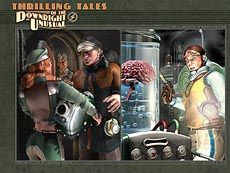 Everybody Gets a Rocket 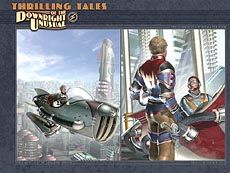 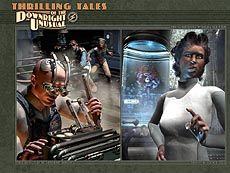 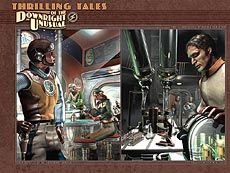 Having a swell breakfast in the retro future 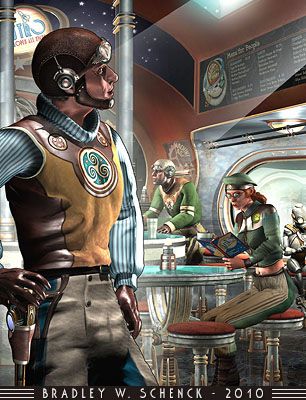 Nat Gonella saw Gwen just as soon as he'd walked through the doors of the Astro - in fact, he realized, he'd hardly ever walked in without seeing her there. Her hours were more regular than Nat's - because although Gwen could plant her trees on the timeclock, there was just no telling when a client was going to want Nat's skills as a pilot - and yet somehow, he thought, she always seemed to turn up. And just as well: he was looking for her.

"Say, Gwen - join you for breakfast?"

She allowed as how that was just fine, so he sat down across from her.

Mabel wheeled over to take his order with those half-annoyed beeps that were nine tenths of her charm, and then skated off toward the kitchen.

Nobody actually knew what the last tenth of Mabel's charm was. There was plenty of speculation.

Nat settled in and got right to it. "Hal Kemp's playing at Club Galacta tonight - want to drop in?"

Gwen Hopkins was five foot eight, as sharp as a tack, and a redhead from the middle of her cortex to the wispy tips of her hair. About 90% of the men in Retropolis would be happy to step out with her. But Nat and Gwen went way back, and somehow that'd never come up. Probably never would. "Sure," she said, "that'd be swell. Anyone else coming along?"

"Not yet." They considered that, and their coffee.

Nat and Gwen catch up on the news, and have a swell breakfast

Tower of the Hand

Using the internet 'good for the brain'