Plot: The story of CARGO takes place on rusty space-freighter KASSANDRA on its way to Station 42. The young medic LAURA is the only one awake on board while the rest of the crew lies frozen in hibernation sleep. In 4 months will Laura's shift be over. 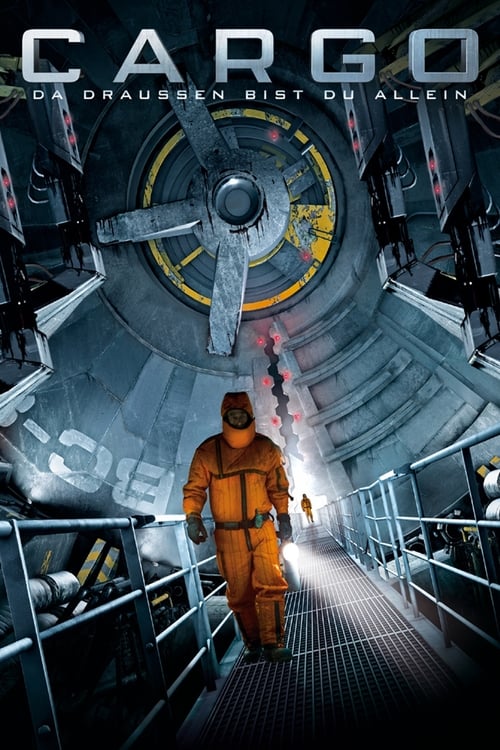 Lights go out like falling dominoes down the oppressively narrow corridors of a deep space vessel. A woman awakens in a vat of green liquid, shocked and confused. She's alone. She hears something -- something that's, not okay. She approaches a glass pod, encrusted with a layer of frost, and jumps at the movement of a shadow. Maybe she's not quite as alone as she thought she was...

So began the montage of completed footage we just saw from Swiss scifi flick Cargo - the first that's ever been seen outside the production. First off, the film undeniably takes cues from Alien, especially in the utilitarian production design. However, not only does it do its source material justice, it clearly has its own unique vision and story to add to the space-station thriller genre. In fact, at this point, we should clarify that we don't even know if there IS an alien in Cargo at all. At one point, a group of about five scientists hover over a large black box and discuss the fact that their "cargo" (hence the film's title) is like a virus... or at least that an organism has grown like one. So sorry, we can't shed any light on what the "cargo" actually is. That mystery remains tightly under wraps.

What we can tell you is that Cargo is BIG. Bigger than we first imagined it to be. It looks like it's got scope, seriously big set pieces and top-notch special FX that easily compete with any Hollywood feature. There's a scene where a couple of bay doors open to reveal the bowels of the station. These doors are like skyscrapers and the ship's cargo hold is a massive maze of bridges over unseen depths. For a Swiss feature it's truly jaw-dropping stuff.

I'm also happy to report that the acting looks to be top notch and the cast are not just a bunch of beautiful 20 somethings mugging for closeups. Like Alien before it, Cargo has approached the design of its future realistically and as a working man's environment. People look tired and it's obviously not easy to take care of stuff that goes south in space (at one point the cast are all in orange sub-zero gear braving hard driven snow... and that's INSIDE the station). Thankfully, it's also in Swiss. It's so good to see that director Ivan Engler hasn't fallen into the trap so many foreign genre directors fall into where, in an attempt to compete in English markets they make their cast speak a language they don't know that well (*cough* Extinction: GMO Chronicles*cough*).

I really wish we could share the footage with you or at least go into more detail about what we've just seen but we made a promise to our source to keep it all hush hush. We know that the Cargo team are at Cannes though, so with any luck we may be able to share something with you all soon. Until then, you can all consider Cargo to be on the top of our radar. From what we've just seen it's obviously one of the best kept scifi secrets of 2009. I have no doubt it'll be a foreign sleeper hit for genre fans.

Can't wait? Check out some behind the scenes vids, and some exclusive stills here.


Cargo is something of a novelty, a Swiss-made SF film with German dialogue translated via sub-titles. Don't let any of that put you off, though, it is worth watching. It is set 250 years from now, with the Earth abandoned as an ecological disaster area and the survivors of humanity living largely squalid lives in a vast orbiting space station, suffering from the activities of anti-technology terrorists. Most people's dream is to win or buy a trip to Rhea, an unspoiled "second Earth" of a planet a few light years away.

A young doctor, Laura Portmann, hopes to move to Rhea to join her sister who won a place there seven years before. To pay the fee she needs to earn more money so takes a job on an interstellar mission to deliver cargo to the unmanned Station 42. Interstellar travel is by huge sub-light-speed spacecraft with the crew spending most of the time in cold sleep, so the round trip will take her eight years, during which the small crew take it in turns to be awake and on duty for eight months at a time.

During Portmann's watch she suspects that there is someone else on board so wakes the rest of the crew. What follows is a tense drama with one revelation after another as the real purpose of their mission and its importance to mankind is gradually uncovered.

The film is atmospheric, both visually and in its soundtrack, with the CGI of the enormous space station and the ship providing an impressive sense of scale. The overall mood is of grim foreboding, emphasised by the rough condition of the old spacecraft, but Cargo is not the horror movie that this setting may suggest. While the plot is a mash-up of elements from other stories the script is intelligent, keeping viewers guessing what is coming next, and the ending has a realistic touch of optimism for the future.