How our genetic machinery winds down after Death

I find this interesting.

Genes could record forensic clues to time of death

Dying, it turns out, is not like flipping a switch. Genes keep working for a while after a person dies, and scientists have used that activity in the lab to pinpoint time of death to within about nine minutes.

During the first 24 hours after death, genetic changes kick in across various human tissues, creating patterns of activity that can be used to roughly predict when someone died, researchers report February 13 in Nature Communications.

“This is really cool, just from a biological discovery standpoint,” says microbial ecologist Jennifer DeBruyn of the University of Tennessee in Knoxville who was not part of the study. “What do our cells do after we die, and what actually is death?”

Some human body tissues show greater levels of gene activity shortly after death than others, a new study finds. Here, the number of genes that changed detectably after death is shown for a subset of tested tissue type. 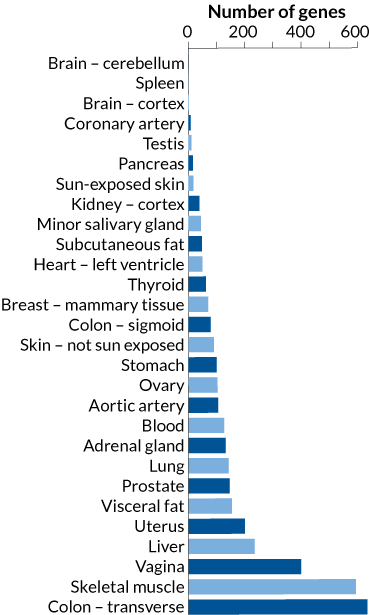 But recent research has found that RNA can be surprisingly stable, and some genes in our DNA even continue to be transcribed, or written, into RNA after we die, Gilbert says. “It’s not like you need a brain for gene expression,” he says. Molecular processes can continue until the necessary enzymes and chemical components run out.

“It’s no different than if you’re cooking a pasta and it’s boiling — if you turn the cooker off, it’s still going to bubble away, just at a slower and slower rate,” he says.

“The biggest challenge is nailing down variability,” DeBruyn says. Everything from the temperature where a body is found to the deceased’s age could potentially affect how many and which genes are active after death. So scientists will have to do more experiments to account for these factors before the new method can be widely used.

Actually, it may sound Klingon, but in my view we are spirits occupying these shells of a body. After we pass on our body becomes an empty shell and our spirits move on to the next life. Dna remaining is known to keep on keeping on because on a molecular level atoms and all the little do-dads are still holding the shell together for a long time. So after many, many years, we eventually break down to dust from wenst we came. How long will it take? Well if the petrified remains of dino saurs and old folks is any indication, we are in for a long wait. So as for any so called "new" findings that pop up over night, I still say there is really and truly nothing new under the sun........

Q
After Death We?

Politics How To Govern Our Nation of Free People

How Before and After Bodybuilding Photos are Often Faked