If you missed it , Its available online

Missed ABC's apocalyptic mini-series IMPACT? Check it out on DVD 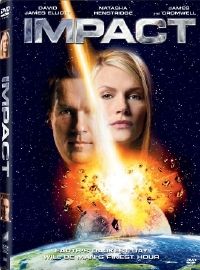 Don't even hide from this, because I know there are a legion of you meteors-destroy-the-earth fans out there. Sony Pictures Home Entertainment has announced that their 2-part destructo drama Impact, starring Benjamin Sadler, David James Elliot, Florentine Lahme, and James Cromwell, will street on September 1, 2009.

Synopsis:
During the largest meteor shower in 10,000 years, a rogue asteroid collides with the moon, causing a huge explosion and sending moon fragments catapulting to Earth. Soon, unusual phenomena begin to unnerve the entire planet: cell phones are disrupted, the normal pattern of the tides shift and heavy objects like cars become temporarily weightless – all as the world’s leading scientists uncover unsettling evidence that the moon’s orbit may have been permanently altered.

Even more frightening, they discover that the new orbit has put the Earth directly in the moon’s path and there are only 39 days remaining until it crashes into the planet. Now it’s up to a small group of experts, cheered on by all nations of the world, to embark on a mission to the moon to try to prevent the deadly impact and save the planet from destruction.

The film itself will be presented in 1.78:1 anamorphic widescreen, along with an English Dolby Digital 5.1 Surround track. Extras will include deleted scenes, and 2 featurettes ("Making of Impact", "Creating Zero Gravity").

Trailer after the break.

You can Stream it Here (Thanx to Helltown) 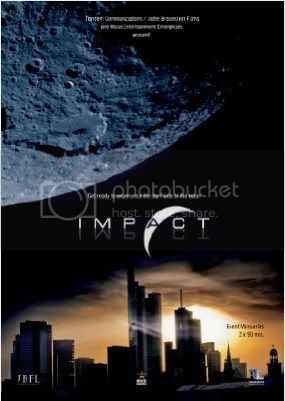 IMDB
While the entire world watches the largest meteor shower in 10,000 years, a rogue asteroid, hidden by the meteor field

This WAS GOOD!
A

David James Elliot, from JAG TV series, is OK...
B

I haven't seen any of them, but I read that of the three genre miniseries broadcast this summer (Impact, Meteor and Storm), Impact was the best. We've got it recorded, and will probably catch it in September, after the summer television season is over but before the fall television season begins.