Planet of the Apes, by Pierre Boulle 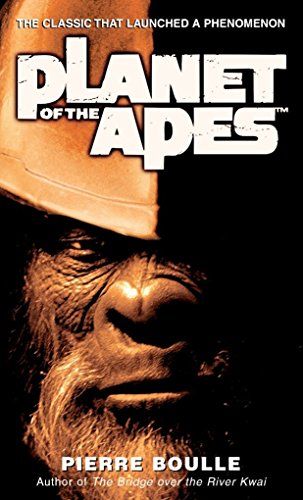 One of the things I have been most interested in lately is identifying and reading SF novels produced by mainstream writers. I know that I have rambled on about this in the past so I’ll spare you the repetitive details this time around. But I do have one other observation that I have not really spoken about until now. I’ve known about certain mainstream writers who have SF titles for years, but it’s only recently that I have learned that some of them have multiple SF stories to their credit. Pierre Boulle and Gore Vidal come to mind. Upton Sinclair, Martin and Kingsley Amis, and others come to mind too, as examples of well known writers who have pretty deep SF catalogs. With just a little bit of research I have managed to add about 35 SF novels and short stories to my list.

Today’s novel, Pierre Boulle’s Planet of the Apes, translated by Xan Fielding, is one of the better known of these types of works. In this well crafted Swiftian-style satire the author endeavors to point out the animalistic motivations for the "well reasoned" decisions that we humans make on a daily basis, and to turn on their ears the racial and inter-species games that we humans play. On the planet Soror, which circles the red giant Betelgeuse, there were four main species of hominids. The humans were mindless and animal-like, and were frequently the subject of cruel and heartless experimentation, mostly to answer medical and evolutionary questions. The Apes were the dominant species. Gorillas were tough and domineering and generally served as enforcers, soldiers, hunters and governors. Orangutans made up the class of respected scientists, theorists and philosophers. They were intelligent but intellectually rigid and politically motivated, and were capable of anything when it came to protecting their intellectual integrity. Last were the chimps, who were bright, inquisitive and fair minded, and were under the thumbs of the orangutans and the gorillas. On the whole the Apes were very interested in the biological sciences, and virtually everything that was culturally important to them came down to the biological implications...Please click here, or on the book cover above, to be taken to the complete review..

Timeline of the Planet of the Apes: The Definitive Chronology