The Marcon SF convention in Columbus, Ohio, was great fun last weekend, though everyone was saddened by the unexpected death of author guest-of-honor Robert Asprin just before the event. Though I was not a reader of his work, I join everyone who mourn his passing. A lesser disappointment for my six-year-old son was the lack of a swimming pool at the downtown Hyatt hotel, but otherwise it was an excellent con. 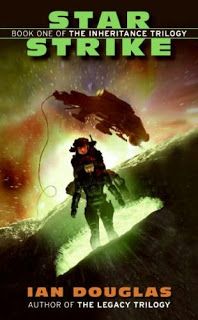 The highlight of the convention for me was getting to meet author and artist William H. Keith Jr., whose work I have followed more years than I care to admit. Bill has had over 80 books published, plus short stories, role-playing games, source books, and lots of fantastic SF art for the Traveller SF role-playing game. Along with his late brother, Andrew Keith, Bill was responsible for much of the "look" of Traveller, and his spacecraft designs are some of my favorites. I was very happy to see some dazzling prints of Bill's graphics at the Marcon art show, and I managed to come home with a great piece by Bill depicting a "Retro Launch" rocket boosting into space. Fact is, I'm in the middle of reading Bill's latest military SF novel, Star Strike, done under the penname of Ian Douglas. His military techno-thrillers (Silent Service; Seals, The Warrior Breed) are done under the H. Jay Riker moniker. Bill is scheduled to appear at Pittsburgh's Confluence con, July 25-27, and if the planetary orbits line up just right, I may make it there, too. 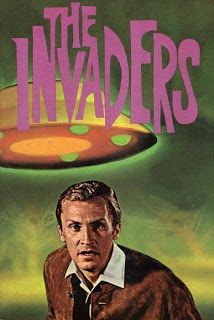 The Invaders, alien beings from a dying planet. Their destination: the Earth. Their purpose: to make it their world. David Vincent has seen them. For him, it began one lost night on a lonely country road, looking for a shortcut that he never found. It began with a closed deserted diner, and a man too long without sleep to continue his journey. It began with the landing of a craft from another galaxy. Now David Vincent knows that the Invaders are here, that they have taken human form. Somehow he must convince a disbelieving world that the nightmare has already begun.

That was how each episode of the 1967-68 SF-horror series The Invaders started, and I'm very happy to report that the first season of that classic Quinn-Martin production was released on DVD this week. Dominic Frontiere's eerie soundtrack still gives me chills. He also scored the original opening and closing themes for The Outer Limits, another sixties SF-horror classic. The Invaders featured ruthless aliens (disguised as humans), great hardware (flying saucers, disintegrator pistols, and the "cerebral hemorrhage" disc weapon), suspenseful stories, and fine actors. I remember watching the episode where guest star Michael Rennie, from The Day The Earth Stood Still, played the role of an important alien leader, a real touch of class by the program's casting director. And though subtle compared to modern standards, I remember many scenes involving the disguised aliens that were very frightening. David Vincent might notice the tell-tale imperfect pinky finger of an alien-in-disguise, the eerie alien theme music would play, and the expressionless alien would make eye contact with Vincent, look directly into the camera. Scenes like that scared the bejeezus out of me more than once when I was a kid, I shamelessly admit. Roy Thinnes, the show's star, was often panned by the critics, but I was always impressed by his serious-as-hell, on-the-edge performance as one man unintentionally made aware of a covert invasion by cold, murderous aliens. Bravo to Paramount for releasing The Invaders on DVD. It's certainly one of the best American SF television series made in the sixties.