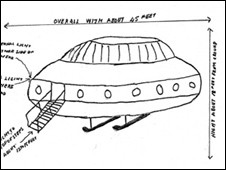 This is how one person described the UFO they had seen

Secret files on UFO sightings have been made available for the first time by the Ministry of Defence.
The documents, which can be downloaded from the National Archives website, cover the period from 1978 to 1987.
They include accounts of strange lights in the sky and unexplained objects being spotted by the public, armed forces and police officers.
One man explained in great detail his "physical and psychic contact" with green aliens since he was a child.
The writer said that one of them, called Algar, was killed in 1981 by another race of beings as he was about to make contact with the UK government.
The letter's author said he visited their bases in the Wirral and Cheshire, while his wife reported seeing a UFO shot down over Wallasey on Merseyside.
The eight released files are part of almost 200 files set to be made available over the next four years.
These documents will be available to download for free for the first month.
A spokesman for the National Archives said they were now becoming available after several requests made under the Freedom of Information Act, and also because of a "proactive move by the Ministry of Defence for an open and transparent government".
Much of the previously classified paperwork is made up of correspondence from the public sent to government officials, such as the MoD and then-prime minister Margaret Thatcher.

You can go. You are too old and too infirm for our purpose

Another document reveals the experiences of a 78-year-old man who alleged that he met an alien beside Basingstoke Canal in Aldershot, Hampshire in 1983. He said he went on board the craft, giving a detailed explanation of it, before being quizzed by the aliens about his age.
He was then told: "You can go. You are too old and too infirm for our purpose."
'Britain's Roswell'
Another letter, from the director of a group called the Wigan Ariel Phenomena Investigation Team, asks the MoD if it had a code of practice for dealing with an alien invasion.
A further document reveals how, on 21 February 1982, a group of customers and staff at a Tunbridge Wells pub reported an unknown object with green and red flashing lights - seen heading in the direction of Gatwick airport.
There are some reports from more official sources. The United States Air Force filed a report about two USAF policemen who saw "unusual lights outside the back gate at RAF Woodbridge" in Suffolk in December 1980.

Government briefing to House of Lords

This relates to the well-known incident of an alleged alien encounter at Rendlesham Forest, dubbed "Britain's Roswell" after the supposed contact made with aliens at Roswell in the United States.
Several drawings are visible in the files from those keen to demonstrate what they had seen.
One such sketch was made by Metropolitan Police officers, who were called out to a house in Stanmore in the London Borough of Harrow on 26 April, 1984.
Three officers spent an hour observing the object in the sky, which "moved erratically from side to side, up and down and to and fro, not venturing far from the original position".
One of the Pcs, who saw the object through binoculars, described it as "circular in the middle with what appeared to be a dome on top and underneath" with different coloured lights.
Common explanations
Visitors to the National Archives site will also find a videocast from Nick Pope, a British UFO specialist.
Mr Pope picked out one incident where a UFO was spotted over central London. 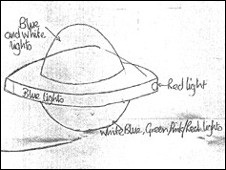 A sketch of a UFO, made by a Metropolitan Police officer

"This is a very interesting illustration that, actually, UFOs are seen in built-up areas. People have this idea they're seen in desolate, rural places.
"There's a sighting actually on Waterloo bridge, when a number of witnesses actually stopped to look at this UFO that was seen over the Thames."
Mr Pope said the most common explanation for UFOs were aircraft lights, bright stars and planets, satellites, meteors, or airships.
A detailed briefing is available within the files, which was prepared by the MoD for Lord Strabolgi, then government chief whip, for a debate on UFOs in the House of Lords in January 1979.
The briefing said that "there is nothing to indicate that UFOlogy is anything but claptrap" and that the idea of an "inter-governmental conspiracy of silence" was "the most astonishing and the most flattering claim of all".

The briefing goes on to say: "Let me assure this House that Her Majesty's government has never been approached by people from outer space." Also available on the website is a podcast from Dr David Clarke, an expert in UFO history, discussing the files.
Dr Clarke, who is a lecturer at Sheffield Hallam University, told the BBC's Radio 4 Today programme that conspiracy theories about aliens are "very difficult to disprove".
He said: "I doubt the disclosure of these files will convince those who believe there is an official cover-up.
"Inevitably, some have already dismissed this release as a whitewash. For them the 'truth' still remains out there, hidden no doubt in more above top secret files hidden somewhere else."

Conspiracy Did the CIA kill JFK because he wanted their UFO files?