Just released by Character options in the UK (not sure about elsewhere). These classic Cyberman figures include Cybermen from the first episode featuring them The 10th Planet, to The Tomb of the Cybermen, Invasion and The new Doctor. If you buy all four you get the parts to make up the Cyber Controller from Tomb of the Cybermen.


For me the best figure is the Invasion Cyberman (second from the left) I would have liked to see figures from later stories as well but these will do for now. 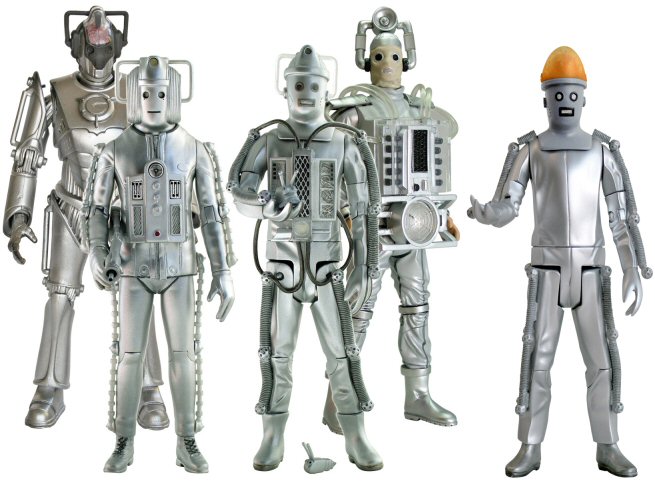 The 'Invasion Cybermen' are indeed the classic version that I remember from watching Who in the 70's & 80's.

Seeing all of the versions lined up like that, it is not hard to see that a future version may go in the direction of the new Cylon from the re-imagined version of BSG.


I agree with you that the best version/look of the Cybermen is that which was based on the Invasion appearance. I think for me the biggest disappointment with the new Cybermen was the dropping of the Telos/Mondas origin. I know that they come from a parallel world, and are that realities Cybermen but I would have preferred to see them as they had been. I suppose the only bright possibility is we might see the alien Cyber race come up against the alternate ones. As the Dalek said in Doomsday " They resemble the inferior race known as Cybermen" never truer words spoken.

As to a Cylon evolution...ummm, that would move them even further from their origins at the end of the day they are cyborgs being part organic. I have often wondered if STNG copied the Cybermen concept for the Borg. Way to many similarities. Was there a Doctor Who fan on the creation/production team ?

DALEK SUPREME D L said:
As to a Cylon evolution...ummm, that would move them even further from their origins at the end of the day they are cyborgs being part organic. I have often wondered if STNG copied the Cybermen concept for the Borg. Way to many similarities. Was there a Doctor Who fan on the creation/production team ?
Click to expand...

I should have clarified the Cylon statement in design/visual terms, not their backstory. :o

For the STNG connection, I don't think they were influenced directly by Who's Cybermen but rather the Borg were a natural extension of some of the themes recurring in Trek, especially with Data. Even going back to the 60's the themes of organic/mechanical merging were present with stories like Spock's Brain. Fast forward a few decades and you've got the Borg.


But with the Cylon, if you want to be technical... some of the new Cylon models are organic.

The Tide Went Out, and The Darkest of Nights, by Charles Eric Maine