Staff member
Pacific Rim is an upcoming Mexican science fiction film directed by Guillermo del Toro based on a screenplay by Travis Beacham.

When legions of monstrous creatures, known as Kaiju, start rising from the sea, a war begins that takes millions of lives and consumes humanity's resources for years on end. To combat the giant Kaiju, a special type of weapon is devised: massive robots, called Jaegers, which are controlled simultaneously by two pilots whose minds are locked in a neural bridge. But even the Jaegers prove nearly defenseless in the face of the relentless Kaiju. On the verge of defeat, the forces defending mankind have no choice but to turn to two unlikely heroes - a washed up former pilot (Charlie Hunnam) and an untested trainee (Rinko Kikuchi) - who are teamed to drive a legendary but seemingly obsolete Jaeger from the past. Together, they stand as mankind’s last hope against the mounting apocalypse.

Del Toro announced that a prequel to Pacific Rim is in the works in the form of a graphic novel. Written by the film’s screenwriter Beacham and released by Legendary Comics, the graphic novel will be set about 25 years before the movie, showing the creation of the robot pilots’ crews and the technology they use. The biographies del Toro put together for the characters in the movie will be a part of the graphic novel.

This movie is gonna be great.... well not in a way that will go down in history as the deepest and most important story line, but its very entertaining and i like the fact that the "kaiju" monsters come from a portal in the bottom of the ocean.

second edit: new pics from the Jaegers (Mechs used to fight the Kaiju)

Maybe they will show more i heard the canadian one was called Honey something, but nothing official

Russian Cherno Alpha (has a steampunk look thin going on)

In the LimaShatterdome in south america there is a new project that will create 2 jeagers for a Strike Group formed by the south american Jaegers: The Tacit Ronin and the Mark-2 that will fight the Kaiju on the pacific limits of the continent

Whoa, this looks cool. Ok, I don't want to know anymore about it. I WANT TO SEE THIS!
J

This sounds familiar. Must have been one of the ones that they showed before the Hobbit the other day. Looked good.

The visuals are awesome, no doubt about it. I hope the story will be good. I'm not a huge fan of the Transformer movies, and this one seems to be tailor made for the folks who are. But I am a fan of the 1989 movie Robot Jox, and I saw one little steal from that movie in the trailer for Pacific Rim.

The operator of the giant robot smacks one fist into his other palm, and we see the robot he operates do the same thing.

So, maybe the producers of Pacific Rim have a fondness for Robot Jox and will give us a movie which recreates some of its fun and imagination.

Staff member
This past weekend Warner Bros. released a pair of new posters of two of the Jaegers mechas. Gipsy Danger is from the USA while Striker Eureka comes from Australia. The files are big so click on the attached files to see them.

Woah this looks like a good bit of romping fun.

Can not wait for this movie. Giant Robots Vs Giant Monsters? Count me IN!!!

Staff member
With the release date getting closer, Warner Bros is starting to air the TV trailers in different markets.

Warner Bros released a new trailer that was previously shown as a teaser at WonderCon.


The official movie poster has also been released prominently featuring Gipsy Danger, the US Jaeger. 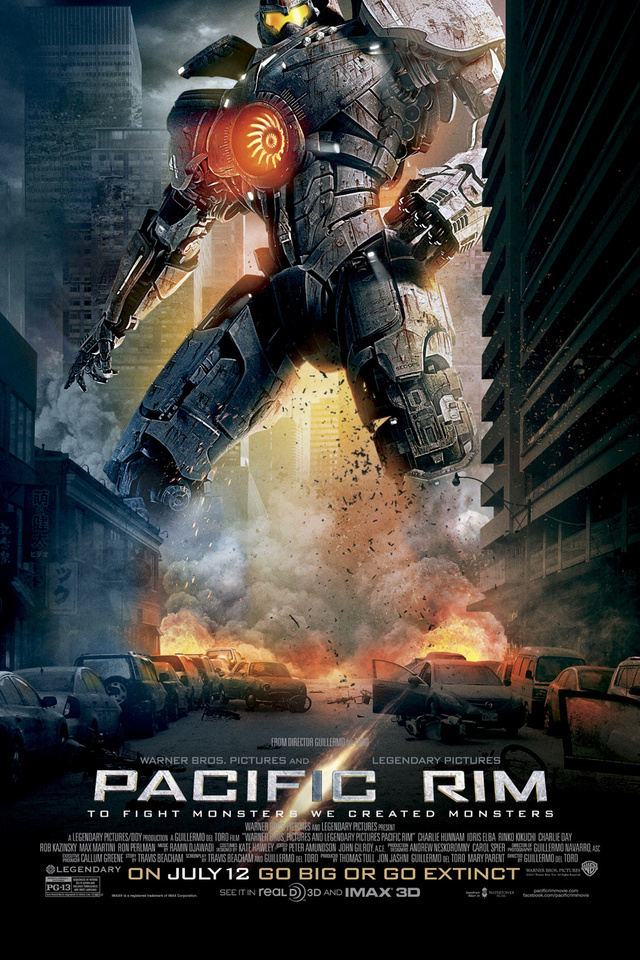 Staff member
I know this just a big action oriented popcorn movie with loud sounds, I do, I really do but.... I also really, really want to see this movie!

Just watch the last trailer posted above in HD mode & full-screen and you'll see why the little kid in me that grew up watching Godzilla movies and robot movies from the 50's & 60's on Saturday afternoons in B&W on a little 13" TV is going "Yes! Yes!" to this one.
S

I'll be honest. Very eager to see this movie.

Cineplex has a pretty interesting promotion going on right now called SuperTicket. It allows you to both purchase a ticket for the movie at the theatre, as well as giving you a download for your digital devices.

Cool!
But I wouldn't use it, movies available online about a day after theate release anyway. I probably will go see the movie however.

anyone see it? mixed reviews.

I just saw it today. It's not a masterpiece of writing but the effects and action were good. It isn't too bad, all in all.

Really a mix of Godzilla and Mobile Suit Gundam Wing. The giant robots were pretty neat but the handicaps for them written into the story were a little retarded IMHO. I know they felt compelled to make them to where the humans weren't overpowering and running in a "godmode" but ....oh well...maybe it was just me. Haha, anyway yeah decent watch, I had fun and enjoyed it.

Pacific Rim was great fun. If you're at all interested in seeing a movie about giant robots fighting giant monsters then you're going to have an enjoyable time in the cinema while this movie is playing.
I think the mixed reviews are coming from people expecting more out of the story and the acting. These are quite valid concerns as the story is light and the acting leaves a lot to be desired.
HOWEVER, this movie isn't about story and acting. It also doesn't pretend to be about story and acting. Five minutes in you're fully aware that this movie is about seeing massive, beautiful CG robots bring the smack down on massive, beautiful CG monsters.
If you go to this movie looking for problems, you're going to find them. The actor's accents are extremely distracting. (Seriously, with an international cast, why have them fake accents? Hire some frackin Australians, there's plenty of them around.) It's bad to the point where I couldn't tell what nationality the commander of the Jaeger program is. (and given he's faking an accent, I think it's important)
There's racial stereotyping also which isn't subtle.
The story has immense potential, but clearly, those making the movie realised that once there's a Jaeger and a Kaiju on the screen, nobody cares about the subtle intricacies of inter-dimensional war.
Overall, the movie felt like a proof of concept to me. I got a real feeling of Guillermo Del Toro saying "See guys? It's possible to make a giant robot movie!"
My wife watched the movie with me, also loved it, but spent the film wishing it was a Neon Genesis Evangelion movie.
In spite of the problems though, for me, the movie was a success. I go to the cinema for fun, so a movie that is fun in spite of it's problems, is a good night out.