Writer
So, I was bantering about inside the head of mine, and decided to come up with a series of releases featuring my space pirate Aston West, all with three short stories in one neat package for under a buck. So, the first of those Triple-Shots is now up for sale over at Amazon and Smashwords, containing my stories "Ever Dark", "Samaritan" and the feature piece "Dead Man's Forge". Hope you'll check it out, and enjoy! Not sure when the next one will be out, but not to worry, it's in the pipeline...

And I have no idea how to make this image smaller...since the re-size feature doesn't seem to work in the posting window.

Writer
Heh...I'm not sure why I didn't remember that this thread was out there...since this last post, I've come up with three more Aston West Triple-Shots since then...with the latest (featuring my story "Payback") just coming out this last week. 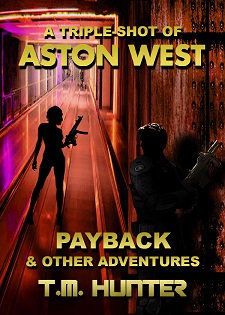 Sounds like an exciting universe to read about! I dig the silhouette style on your book covers.

JRenee said:
Sounds like an exciting universe to read about! I dig the silhouette style on your book covers.
Click to expand...

Thanks! My cover artist has always done fantastic work for me...I always prefer the silhouettes, because then people aren't influenced on their impression of what my characters look like.